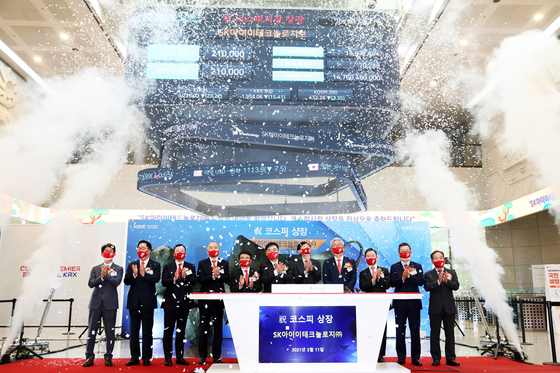 The company’s market capitalization settled at around 11 trillion won Tuesday, making it the 36th largest Kospi stock and slightly larger than Korean Air Lines. It traded at the close at 125 times 2020 earnings, compared with about 33 for all Kospi stocks at the end of April according to the CEIC.

After the IPO, SK ie technology is 61.2 percent owned by SK Innovation, down from 90 percent before the sale of shares.

The company was marketed as a play on the expected growth in the sale of electric cars. It said funds raised through the IPO will be used to expand it production capacity and research and development.

Trading was volatile on the first day after the price failed to hit upper limits. Initial public offerings can double on opening and then go up an additional 30 percent on their debut. A number of Korean stocks have done just that recently, including SK Bioscience and Kakao Games.

The shares of SK ie technology hit 222,500 won about three minutes into trading, but then plummeted, falling more than 30 percent from the day’s peak. Despite a wide bid-ask spread just after the open, transaction volume built quickly, with 11.2 million shares worth 1.9 trillion won changing hands on the first day.

Analysts expect more bouncing around for the shares.

“During the next three to six months after listing, we expect the company’s share price to be quite volatile,” said Hwang Kyu-won, an analyst from Yuanta Securities.

Ju Min-woo, a research fellow at Meritz Securities, projects optimal share price over the following year to be around 180,000 won, while analyst Kim Hyun-soo from Hana Financial Investment projected 148,000 won.