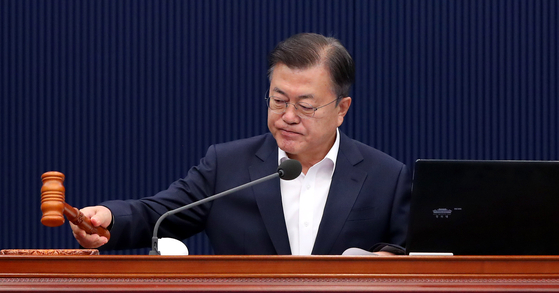 
President Moon Jae-on in Tuesday demanded the National Assembly conclude confirmation hearings of his three cabinet nominees, taking the first step to appoint the trio despite growing resistance over their ethical lapses.

The opposition parties said they do not approve of the remaining nominees because they are ethically unfit. Some members of the ruling Democratic Party (DP), including five-term Rep. Lee Sang-min, also said Moon must withdraw the nominations.

Science minister-nominee Lim faced a barrage of questions on her integrity and ethics, related to suspected academic fraud, manipulating a real estate property contract and taking her children on business trips.

Oceans and fisheries minister-nominee Park was criticized for his wife’s business activities, which allegedly involved smuggling large quantities of ceramics into Korea from overseas, evading duties.

The main opposition People Power Party (PPP) in particular opposed Noh's nomination, saying he was unfit to be land minister because of his past real estate dealings in which he abused the system while serving as a civil servant to make money on real estate.

While the president requires the legislature’s approval to appoint the prime minister, he does not need one to appoint a cabinet minister. Since taking office in May 2019, Moon has appointed 29 minister-level officials without the opposition parties’ blessings.

Moon already hinted that he will push forward with his cabinet picks. “I don't think the Blue House vetting process was a failure just because opposition politicians protested my nominees," he said during a special press conference on Monday to mark four years in office.

He then proposed that the National Assembly change how it operates the confirmation hearings. He said the lawmakers must scrutinize a nominee’s professional abilities in a public session and discuss his or her ethical issues in a closed-door session. Currently, all sessions are made public.