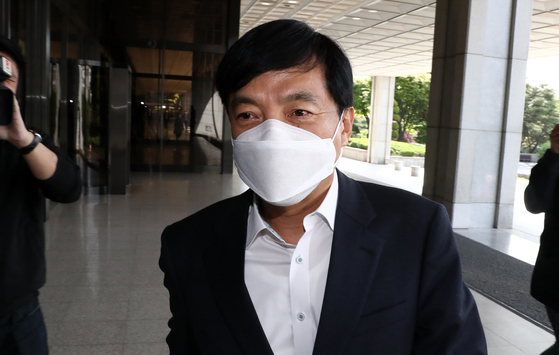 
Acting Prosecutor General Cho Nam-kwan on Tuesday gave a green light for the indictment of Lee Sung-yoon, a top prosecutor, for abuse of power, accepting a recommendation by an outside panel of experts.

The prosecution selected 15 out of 250 experts to form the panel. It was chaired by former Supreme Court Justice Yang Chang-soo. Thirteen attended the meeting on Monday.

After four hours of deliberation, a vote took place to decide whether Lee should be prosecuted for abuse of power. Eight voted for Lee's indictment, four voted against and one abstained. Yang had no voting right.

The panel held another vote on whether the prosecution should continue its probe of Lee. Eight said it was time to wrap it up, three said the probe should continue and two abstained.

The votes signified that a majority of the experts believed enough evidence had been gathered for Lee's indictment and trial.

Lee attended the meeting to argue his case in person. Lee Jeong-seob, who is leading the probe of Lee for the Suwon District Prosecutors’ Office, also came to explain why his team was going after the Seoul prosecution chief.

Suwon prosecutors are investigating a suspicion that the Ministry of Justice circumvented the law in 2019 to slap an overseas travel ban on former Vice Justice Minister Kim Hak-eui in order to probe allegations that he took bribes and sexual favors from businessmen from 2006 to 2009. Cha Gyu-geun, a senior ministry official, and Lee Gyu-won, a prosecutor from the Supreme Prosecutors’ Office, were indicted for having illegally banned Kim from leaving the country on March 23, 2019.

Earlier this year, a criminal complaint was filed saying that the Anyang Branch of the Suwon District Prosecutors' Office noticed that the travel ban on Kim appeared to be illegal. When Anyang Branch prosecutors tried to investigate, the Supreme Prosecutors’ Office pressured them to drop the case, the complaint said.

At the time, Lee Sung-yoon was the Anti-corruption Department Chief of the Supreme Prosecutors’ Office. He was accused of pressuring the Anyang Branch to drop the case.

The Suwon District Prosecutors’ Office submitted written statements from prosecutors and investigators who worked for the Anyang Branch at the time saying Lee had pressured them to drop the case.

“Both sides explained their positions and panel members had enough time to ask questions,” Yang said.

The panel’s conclusion was a recommendation and does not have to be followed by the Suwon District Prosecutors’ Office. But prosecutors have respected review panel decisions in each of the previous times the process was used, except in a case against Samsung Group leader Lee Jae-yong. Last year, a panel advised against the indictment of Lee for his role in a controversial business merger in 2015, but the prosecution went ahead and indicted him. Lee is currently being tried.

The so-called investigation review system, introduced in 2018, is supposed to bring oversight to high-profile probes and test the legitimacy of the criminal justice process. Many high-profile prosecutions in the past have been politically motivated.