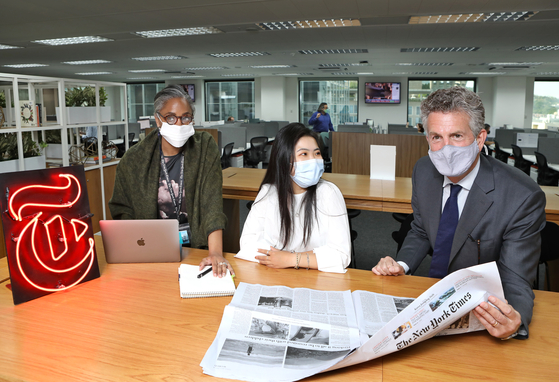 
The New York Times officially launched its new Asia hub in the heart of Seoul Monday after moving its digital news operation from Hong Kong.

"Looking at a five, 10, 20 year horizon, [Seoul] just feels like it's right in the middle of the action, and it hits a lot of other criteria," Dunbar-Johnson said.

"What's important about this office is that it gives us room to grow," he continued. "We have quite a lot of ambitions in the region, so this is really a manifestation of those ambitions."

The Times launched its new Asia hub on a floor of an office building in Jongno District in the heart of the Korean capital, which has a maximum office capacity of 50 staffers. Currently, there are around 20 editors and staff, with more expected to come once Covid-19 restrictions are relaxed. The Seoul office is designed to resemble closely the New York headquarters.

"The reality is that the Asia region is extremely important to us, and we are expanding our international coverage," Dunbar-Johnson said. "This is really a critical region for us, so it makes sense that we are here, and I think it's likely we will continue to grow from here."

As of May, the Times has more than 7.8 million paid subscriptions for its print newspaper and digital products, according to the company's first-quarter results released last week.

The New York Times set a record for its subscriptions in 2020, adding a record 2.3 million digital-only subscriptions. Digital subscribers, however, slowed in the first three months of this year.

Of current paid subscribers, 6.9 million are digital platform users for online news or the Times' Cooking and Games apps. The rest get the printed paper. The Times also reported that registered users who have not paid for subscriptions, who can read a limited number of free articles, reached 100 million for the first time.

The Times has set a goal of reaching 10 million subscribers by 2025.

This could mean up to 2 million digital subscribers internationally by 2025, which he said was a "modest" ambition, adding "we can go beyond that."

"Frankly, most of our international subscribers are currently in Canada, Europe and Australia, and I think we've got quite a lot of potential to grow in Asia," added Dunbar-Johnson. "In order to be successful, we need to be relevant internationally; we need to cover the world very well."

The New York Times made headlines when it announced last July that it would move its digital news operation from Hong Kong -- which has served for decades as headquarters for many English-language media outlets in Asia -- to Seoul. The decision followed concerns about a sweeping national security law passed by China in June, foreign journalists getting expelled from China, and challenges getting work permits in China.

"The reality is that since the Chinese national security law, unfortunately, it has become more and more difficult for us there," said Dunbar-Johnson. "It's not to say we have abandoned Hong Kong, we still have reporters there. But we just felt that long-term, given our ambitions, it made more sense for us to be outside of Hong Kong. And Seoul makes a lot of sense for us."

However, he noted on the move to Seoul, "We're not sending a message to anybody… It's not that we are against the Chinese or anybody else, it's simply what makes the most sense for us to grow and evolve our business and invest in our journalism. And this felt like a good place to be for us to do that."

He cited some factors such as Korea's digital advances, ease of business, and a high score on the World Press Freedom Index. 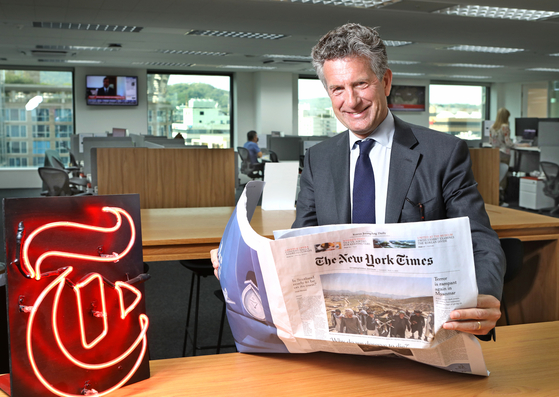 The Times has come a long way.

In the first quarter of 2011, the New York Times Company reported that its net income fell 57.6 percent, to $5.4 million, compared with $12.8 million in the same period the previous year, due to a depression in the print advertising market. However, the company saw potential in digital subscriptions, gaining some 100,000 subscribers since March 28, 2011, when the Times began limiting the number of articles that visitors to its website could read for free.

The New York Times Company reported an adjusted operating profit of $68 million, or a 54 percent jump from last year, according to first-quarter results. Total revenues rose about 6.6 percent to $473 million.

Dunbar-Johnson noted three guiding principles for the newspaper: investing in journalism, technology and understanding the customer.

He pointed out that a decade ago, the New York Times newsroom was around 1,200 strong, which grew to around 1,700 journalists. It has also expanded its bureaus around the world and reported from 160 countries, before Covid-19 travel restrictions last year.

Earlier Tuesday, Dunbar-Johnson met with former Secretary-General of the United Nations Ban Ki-moon to discuss climate change and the upcoming 2021 United Nations Climate Change Conference, or COP26 Summit, in Glasgow in November. The New York Times has plans to set up a climate reporting hub to cover the summit with a dozen reporters and editors.

On the decision to make Seoul the Times' new Asia hub, Dunbar-Johnson said, "It shows our confidence in Korea, and Korean society, that we want to establish a place here. This is our home now for Asia. We are very happy to be here, and we want to contribute to the society here."

Dunbar-Johnson has served in his current position since 2013, and previously was publisher of the International Herald Tribune, which the New York Times took full ownership of in 2002.

The New York Times, founded in 1851 and controlled by the Ochs-Sulzberger family, has won 130 Pulitzer Prizes, the most for any newspaper.

Why NYT didn’t relocate to Tokyo