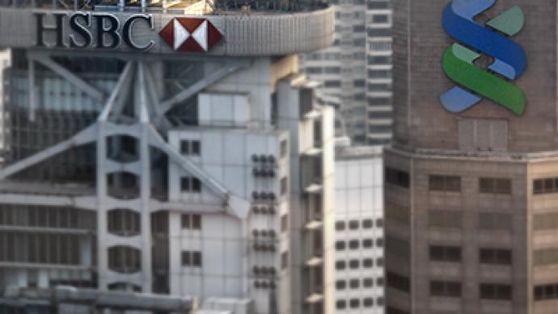 
Hong Kong's attractiveness as a global financial hub continues to falter with Beijing passing the controversial national security law on the territory on Tuesday. But even with the city losing its luster, Seoul has little chance of securing the coveted spot given its unfavorable working environment and regulations.

The Korean government recently conducted a closed-door survey of foreign financial companies in Korea on the attractiveness of the country in terms of replacing Hong Kong as Asia's next financial hub, and the result was disappointing.

All respondents of the survey answered negatively to the questions, citing the overall working environment and regulations imposed on foreign financial companies when explaining what makes the country so unattractive for their businesses.

“They said it is impossible for foreign financial companies to work under the 52-hour per week regulation,” said a government official associated with the survey.

Corporate tax is another element that is keeping foreign companies away. The maximum corporate tax in Korea is 25 percent, while in Singapore and Hong Kong it is 17 percent and 16.5 percent, respectively.

Japan levies a maximum of 30.6 percent on corporations, but it is seeking to balance the high rate with regulatory reforms.

A recent agenda proposed by the ruling Liberal Democratic Party in Japan included easing standards for issuing visas to qualified global hires to boost recruitment and overhauling regulations imposed on financial companies in Japan establishing themselves in the country.

With Hong Kong's autonomy under threat, its global status as a financial hub is at risk. Global financial companies that have maintained the regional headquarters in the city are considering moving elsewhere. Some are calling it the "Hexit."

People are contemplating moving too. According to Ming Pao newspaper, a public opinion poll carried out in May showed that 37.2 percent of the respondents were considering moving out of the region to live elsewhere.

With the exodus of people and capital from Hong Kong, nearby Asian cities are vying to take over the coveted status. In Japan, the government and the ruling parting are jointly pushing the transformation of Tokyo, while Singapore is also considered a plausible option with its liberal immigration policies and the country’s high-level of English proficiency. 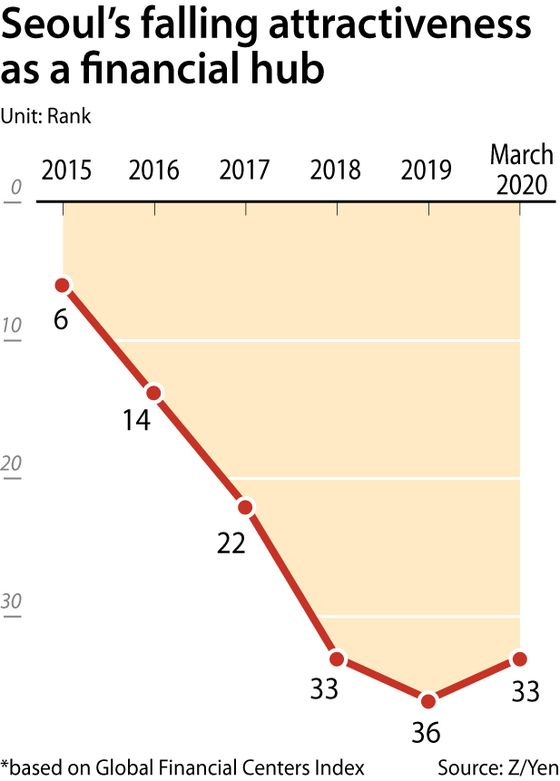 According to British consulting company Z/Yen, in the global financial centers index (GFCI), an index that assesses the competitiveness of financial centers around the world, Seoul was No. 33 in March 2020. Busan was ranked as 51st. Hong Kong was ranked sixth as of March this year -- three steps down compared to six months earlier.

Tokyo was in third place, three steps higher than six months earlier, while Shanghai was in fourth and Singapore fifth. New York and London were ranked in the first and second spots respectively.

Korea has no shortage of hubs.

“It is nonsense to even hope to become a hub for financial companies without a radical elevation in regulation,” said Oh Jung-geun, chairman of Korea’s Finance ICT Convergence Association.

“With the traditional manufacturing industry losing competitiveness in Korea, financial companies are also leaving, thinking that Korea has nothing more to offer in terms of new business,” said Choi Woon-yeol of the Democratic Party who was formerly a business administrations professor at Sogang University.

“Not only for finance, but also regulations throughout the entire industry should be elevated in order to attract more investments which is a first step that should be taken to become the next financial hub.”

Creating a talent hub on science and technology

Why The New York Times is moving its hub to Seoul