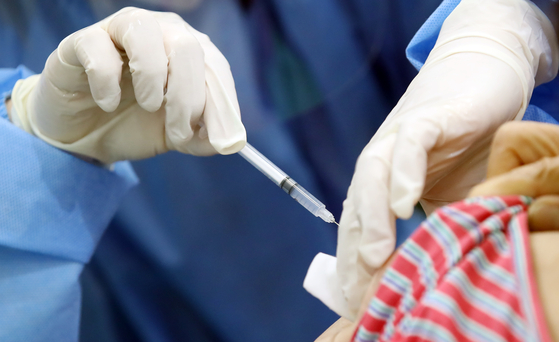 
Some of Korea’s largest companies including Samsung and LG have decided to give employees paid leave when they get Covid-19 vaccinations -- for up to three days.

Samsung Electronics, Korea’s largest firm by market cap, announced internally Wednesday that every employee will be guaranteed paid leave on the day they get vaccinated. If the employee develops side effects from the shot, he or she could additionally take paid leave up to two days without submitting a doctor’s note.

On Tuesday, the company’s labor union submitted an official request asking for three days paid leave for every vaccinated employee. According to the company, discussions for “vaccine leave” had  been underway for about a month.

SK hynix told employees on Wednesday that they will be given one day of paid leave and another two days if they develop symptoms.

LG Group decided to be a little more generous, guaranteeing two days of paid leave regardless of whether the employee experiences side effects or not.

Compared to traditional conglomerates, IT firms were even faster in lavishing staff with inoculation benefits.

On May 5, Naver said all of its 7,500 employees from July would be entitled to paid leave on the day after they are inoculated. Game company NHN gave staff two-day leaves.

In late March, the government said it would introduce “vaccine leaves” for any one that reports side effects. They were to be granted paid leave of up to two days, according to their conditions. A doctor’s note or medical documents were not required.

In Korea, inoculations started with AstraZeneca vaccines in late February. The idea of a “vaccine leave” was raised soon after, as some people complained of difficulties in immediately returning to work.

According to a government survey released in late March, 32.8 percent of 18,000 inoculated people said they experienced some inconvenience in their everyday lives. Around 3 percent had to visit a medical institute due to unexpected side effects.

The most frequently reported side effects were pain at the inoculated spot (28.3 percent), muscle pain (25.4 percent), fatigue (23.8 percent), headache (21.3 percent) and fever (18.1 percent). Multiple answers were allowed. The possibility of experiencing side effects was higher among younger people.

Providing leave of up to three days was based on the idea that side effects normally occurred within 10 to 12 hours of the injection and disappeared within two days.

While the leave was mandatory for public sector workers, the government did not make it mandatory for private companies, but did suggest they follow suit.

Some lawmakers proposed bills to mandate vaccine leaves in the private sector and provide financial support for companies that offered them. But according to local reports, the idea is facing opposition from the finance ministry and the Korea Disease Control and Prevention Agency, citing excessive costs.

SK bioscience looks to grow even as pandemic wanes