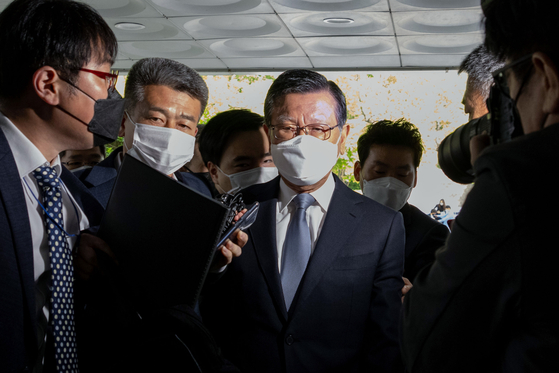 Park Sam-koo, a former chairman of Kumho Asiana Group, before he attends an arrest warrant hearing at the Seoul Central District Court on Wednesday [NEWS1]

The Seoul Central District Court approved the prosecution’s request for a warrant to put Park under pre-trial detention after questioning the 76-year-old businessman and examining relevant documents presented by prosecutors.

Park is accused of taking more than 130 billion won ($116 million) in low-interest loans without collateral from nine group companies, including Asiana Airlines, to support Kumho Buslines, a family-controlled company.

Park resigned as chairman of Kumho Asiana Group and Asiana Airlines in 2019 to take responsibility for an accounting scandal at the airline in 2019, when its auditor refused to sign off on the accounts and the company was forced to issue a restatement.

Park was then charged with unfairly mobilizing Asiana Airlines and other group companies to support Kumho Buslines.

In 2016, Kumho Asiana Group signed an exclusive contract with Swiss airline caterer Gategroup for providing in-flight meals to Asiana Airlines. The Swiss company then acquired 160 billion won of bonds with warrants issued by Kumho Buslines and paying no interest, according to Korea Fair Trade Commission.

As the financial condition of Kumho Buslines worsened, nine group companies lent 130.6 billion won in 45 installments without security to Kumho Buslines at interest rates of 1.5 to 4.5 percent – lower than the market rates of 3.49 to 5.75 percent.

Kumho Asiana denied the deal favorable to Kumho Buslines was related to the Swiss company getting the exclusive contract. It said that the deal was negotiated normally and did not result in illegal gains for relevant shareholders.

Kumho Buslines saved around 16.9 billion won in interest costs as a result of the loans. Park and his family were found to have earned at least 7.7 billion won in profit and 250 million won in dividends.

Park said, “I’m sorry,” when asked by reporters on whether he accepts the charges before attending the arrest warrant hearing at the Seoul court on Wednesday.