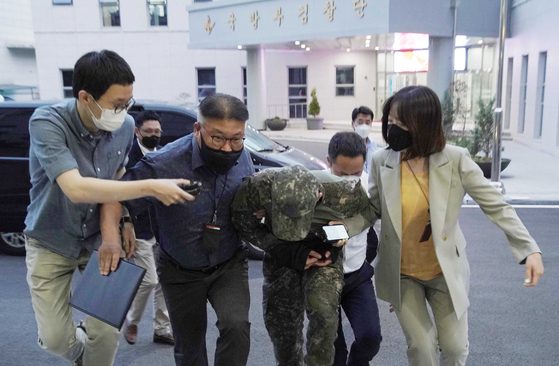 The sergeant accused of sexually harassing a female Air Force officer who later took her own life is escorted to his warrant review before a court martial in Gyeryong, South Chungcheong, on Wednesday. [YONHAP]


President Moon Jae-in on Thursday expressed his sympathy for a female Air Force officer who reportedly took her own life due to unresolved sexual harassment by a fellow officer and ordered a thorough investigation of the Air Force over its handling of her case.

According to presidential spokesperson Park Kyeong-mee at a Blue House press briefing on Thursday, the president said, "My heart hurts when I think of the despairing victim," emphasizing that the probe he ordered must "seriously investigate and take stern measures regarding the handling of the sexual harassment report by the [officer's] unit, the additional pain inflicted by the officer's superiors and colleagues and the silencing of the woman's suffering."

Moon's order for an investigation into the case comes three days after surviving family members uploaded a petition to the Blue House website on Monday, urging an official reckoning over her death and the sexual harassment which they believe led her to take her own life. The petition garnered over 217,000 signatures by Tuesday, passing the quota for a presidential response.

The female officer who died was an Air Force sergeant stationed at a base in Seosan, South Chungcheong.

Although the sergeant reported the harassment the next day, her family said that a superior officer in her unit urged her to reconcile with the offending officer, and even called her boyfriend — a fellow officer in the same unit — to persuade her to reconsider her complaint.

In their Blue House petition, the family accused the officer's Air Force unit of attempting to cover up the incident and failing to follow established victim protection procedures.

After going on a two-month leave and transferring to a different unit, the sergeant returned for duty on May 18, but was found dead in the officers' quarters four days later. According to her family's petition, the sergeant filmed her last moments, including her suicide.

The family have delayed her funeral by 12 days thus far in their pursuit of an investigation.

In addition to the officer who sexually harassed the sergeant — who was arrested for his warrant review before a court martial on Wednesday evening — the sergeant's family has filed a criminal complaint to military prosecutors against three officers in her former unit, accusing them of dereliction of duty and attempted coercion by trying to force the sergeant to drop her complaint instead of punishing the officer who sexually harassed her.

The case is expected to reverberate through the Air Force hierarchy as the president also said in his statement that the case must not be seen "merely as something that happened between the victim and perpetrator, but also as a problem in the chain of command and reporting up to the highest rank."