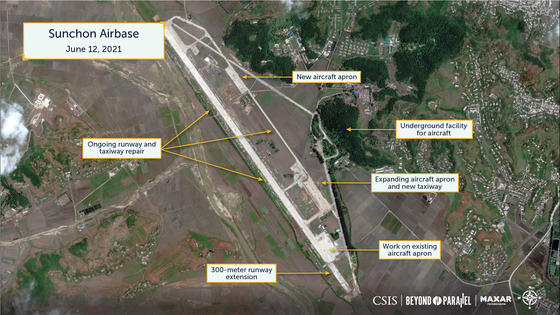 A satellite image from June 12 showing ongoing repairs and extensions to runways and aircraft aprons at Sunchon Air Base in South Pyongan, North Korea. [CSIS]


Satellite imagery from June 12 shows major ongoing maintenance and expansion at the Sunchon Air Base in South Pyongan, North Korea, which usually houses the country’s most modern and flightworthy military aircraft, according to a U.S. think tank on Thursday.

The air base, which is home to the Korean People's Army Air and Anti-Air Force Su-25 ground attack aircraft and MiG-29 fighter aircraft, is undergoing repairs and extending its runways and taxiways, according to analysis of satellite images conducted by the Center for Strategic and International Studies (CSIS) and posted on its Beyond Parallel website on June 24.

Images analyzed by the think tank show that the upgrades to Sunchon Air Base began between April 11 and 14, when the North Korean air force redeployed its Su-25 ground attack aircraft and MiG-29 fighter aircraft to air bases in Kaechon and Pukchang, South Pyongan.

According to Beyond Parallel analyst Joseph S. Bermudez Jr., the movement of these aircraft to different bases “is highly suggestive of a far higher level of flight readiness than is normally attributed to these units, although this does not necessarily equate to combat readiness.

“The timing of the maintenance project and the aircraft movements were apparently designed to coincide, in part, with the [North Korean air force’s] annual summer training cycle” from June to September, according to Bermudez.

During the past 20 years, the North Korean air force has often undertaken major redeployments of its aircraft to train pilots and to test its operational readiness during the period between winter and summer training.

Five days after this redeployment of major aircraft, large piles of gravel and sand was first observed being distributed on and alongside the main runway and taxiways at Sunchon Air Base on April 19.

This work focused on repairing damage to and improving the shoulders of the runway and taxiways, and on addressing drainage problems. A runway extension project also began at the southern end of the runway.

The runway, taxiway and apron repairs and extensions will likely provide a safer operating environment, additional parking space for aircraft, greater run-out for landing aircraft, and accommodation for more heavily loaded or larger aircraft, according to CSIS.

However, satellite images up until June 12 do not show any changes to the various control towers, radar equipment, support buildings or housing areas associated with the Sunchon Air Base.