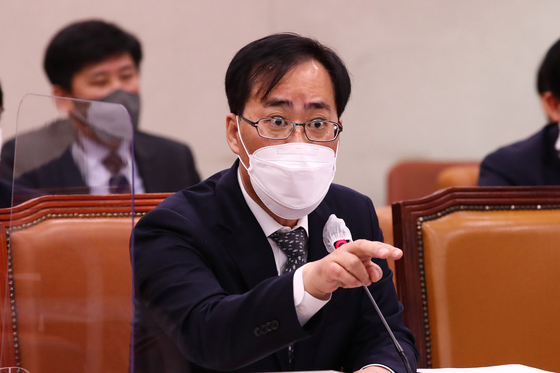 Park Jun-young, President Moon Jae-in's pick to head the Ministry of Oceans and Fisheries, answers a lawmaker during his confirmation hearing at the National Assembly on May 4. Park announced Thursday that he was giving up the nomination. [NEWS1]


President Moon Jae-in’s pick to head the Oceans and Fisheries Ministry gave up his nomination Thursday, accepting public criticism that he is unfit to serve due to his wife’s dubious business practices.

Park Jun-young, who is vice minister of the ministry, issued a statement Thursday, nine days after a National Assembly confirmation hearing in which lawmakers from both the opposition People Power Party (PPP) and even the ruling Democratic Party expressed opposition because of his ethical lapses.

Park's wife was accused of smuggling large quantities of ceramics into Korea from overseas, evading duties.

When Park was working as a diplomat at the Korean Embassy in London from 2015 to 2018, his wife purchased about 1,250 ceramic pieces and sent them to Korea using diplomatic pouches. In 2019, she opened a café in Gyeonggi Province and sold the ceramics without obtaining a retail license. Her business continued until last month.

These activities were reported in the press before the confirmation hearing, and Park issued an apology, but it did little to help his situation.

“It is undeniable that I fell short of the people’s demand for high ethical standards from a public servant,” Park said in his statement Thursday. “I apologize for my carelessness.”

Park said he was giving up the nomination because he did not want to trouble President Moon and the ministry any further.

Park is one of three cabinet nominees that the PPP has pressured Moon to withdraw because of ethical lapses. The other two are science minister-nominee Lim Hye-sook and land minister-nominee Noh Hyeong-ouk.

Lim was criticized for suspected academic fraud, 13 address changes allegedly to send her children to better schools, manipulating a real estate property contract and taking her children on business trips.  Noh was labeled unfit to be land minister because of past real estate dealings in which he allegedly abused the system while serving as a civil servant.

Moon has made clear his wish to appoint the three despite the National Assembly’s reluctance to confirm them. At a press conference on Monday, Moon said he did not think the Blue House had failed in its vetting of candidates. On Tuesday, he urged the National Assembly to conclude the confirmation process by Friday.

On Wednesday, ruling party lawmakers pressed Moon to give up at least one nominee as a political gesture to the opposition.

A senior presidential aide said Thursday that Park made the decision to withdraw on his own. He said Park had not contacted Moon directly before giving up his nomination, but had communicated with the Blue House.