Who controls our fates?

“The ideas of economists and political philosophers, both when they are right and when they are wrong, are more powerful than is commonly understood. Indeed, the world is ruled by little else. Practical men, who believe themselves to be quite exempt from any intellectual influences, are usually slaves of some defunct economist.” British economist John Maynard Keynes famously observed in the last page of his General Theory of Employment, Interest and Money.

Five former bureaucrats from economy-related offices published a book entitled “Economic Policy Agenda 2022.” It presents a set of policy suggestions presidential hopefuls could study ahead of the presidential election next March. It reflected retired government officials’ wishes to set presidential aspirants in the right direction in economic policy and discourage knee-jerk populism.

Byeon Yang-ho, former director of financial policy for the Ministry of Finance, led the writing of the book. Byeon’s misfortune in 2006 became so famous that a syndrome was named for him. He was indicted for getting involved in the sale of the Korea Exchange Bank to Lone Star at a cheap price amid a crisis and served jail time before he was cleared on appeal. He vowed to never get involved in government affairs again. Since his personal debacle, he kept a low profile.

Byeon rounded up some of his colleagues from the Finance Ministry who held higher titles — Financial Services Commission Chairman Lim Jong-ryong, Lee Suk-joon, minister of the Office for Policy Coordination at the Prime Minister’s Office, Korea Customs Service Commissioner Kim Nak-hoe, and vice Finance Minister Choi Sang-mok — to co-author the book. He obviously didn’t succeed in distancing himself from state affairs.

The purpose of the book is clear. “The economy is about earning and spending. Spending is easy, but earning hard. The country cannot run well if governance only revolves around spending,” Lim wrote. “Earning should come from deregulation, fair competition, and spending from taxing of riches.” A three-wheeled economy cannot run without any one of them. 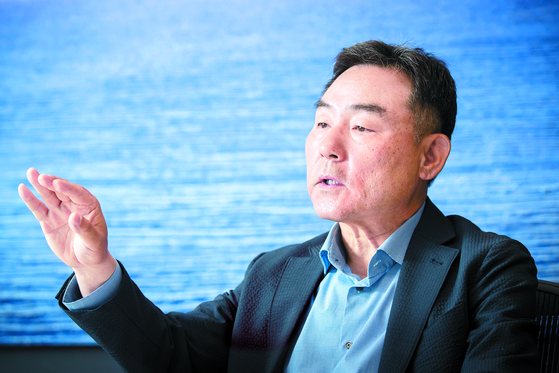 Byeon Yang-ho, former director of financial policy for the Ministry of Finance, speaks about a book he wrote, “Economic Policy Agenda 2022,” to suggest a new direction for the Korean economy in an interview with the JoongAng Sunday on May 6. [JUN MIN-KYU]

The book gets right down to the point in a dry and rigid tone. Policy direction outlines are backed by facts and numbers. It ponders renowned economist Milton Friedman, the founder of the Chicago school of economic theory who championed less government intervention and tax cuts. He advocated a negative income tax — taxing the rich and subsidizing the poor who earn income below a certain threshold. Byeon’s proposal can compensate for the flaws in Gyeonggi Province Governor and front-running presidential aspirant from the ruling front Lee Jae-myung’s platform on universal basic income and also be less costly.

The retired government officials propose an income subsidy for 33.7 million, or 67 percent of the population, which woul require a budget of 97.1 trillion won ($86 billion). They claim the government can afford the money if social welfare budgets are streamlined and various tax exemptions are lifted. They specified areas in which budget savings are possible. Their know-how and experience helped them come up with such details.

The timing of the publication is important to find the right readership. A finance ministry veteran wrote a similar book four years ago: Byeon Yang-kyoon, former policy chief of the presidential office during the Roh Moo-hyun administration. His book, “Transition in Economic Policy,” was also rich in details and ideas. It called for a shift in macroeconomic policy from the Keynesian model to Joseph Schumpeter’s concept of entrepreneurship and innovation for capitalist development. The ideas interested many. The liberal front could have avoided economic policymaking failures and the housing policy mess if it had paid heed to his suggestions. Since the book was published just before the 2017 snap presidential election, it failed to make the mark it might have.

In order for the advice from the latest book by bureaucratic veterans not to go to waste, presidential aspirants should be willing to adopt the huge task of countering resistance from big employers and unions as well as those who enjoy social welfare benefits. A candidate should have the guts to change the foundation of the nation. Few may be up for the political risk. One of the authors challenged,” Who will dare to drink the poisoned wine?” But someone who is going after the throne must not fear taking up a challenge.