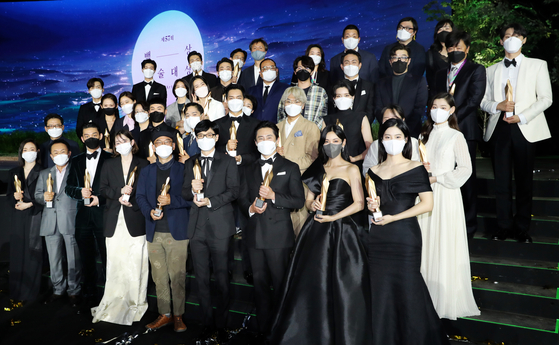 Recipients of the 57th Baeksang Arts Awards pose for a photo with their trophies on Thursday night at Kintex in Goyang, Gyeonggi. [JOONGANG ILBO]

Comedian Shin Dong-yeob and singer-actor Bae Suzy were the M.C.s at the ceremony held in Kintex in Goyang, Gyeonggi, organized by JTBC Plus and Ilgan Sports.

The annual ceremony awarded content aired or released on public broadcasters, cable channels and local streaming platforms from May 1, 2020 to April 11 this year.

Yoo, who is celebrating his 30th anniversary this year since his debut as a comedian in 1991, received the grand prize in the television division for his ability to bring out the most in his interviewees in his show “You Quiz on the Block” airing on tvN. His interview excerpts with not just celebrities but a wide variety of people in different professions would make headlines or go viral on YouTube. The versatile entertainer also never hesitates to expand his horizons by trying his hand in different types of show formats such as “Sixth Sense” on tvN, “Hangout with Yoo” on MBC and Netflix variety series “Busted!” The entertainer last received the grand prize in the same category in 2013.

“Nowadays people refer to me as a host or an M.C., but deep down, I’m a comedian,” he said at the acceptance speech. “I will try to bring more laughter to the people.”

Director Lee took the grand prize in the film division for his historical drama film “The Book of Fish” and the artistic local scenery he created by making the film black and white. “The Book of Fish” reinterprets the works of highly esteemed scholars from the Joseon Dynasty (1392-1910) — Jeong Yak-jeon (1758-1816) and Jeong Yak-yong (1762-1836) — and makes it easier to the contemporary audience to understand.

“It takes a lot of money to do a historical drama film,” Lee said. “When the script for ‘The Book of Fish’ came out, I wasn’t confident enough to make this film commercially successful because I didn’t think the story could reach a wide number of people. I had to cut down on the production costs as much as possible, and during that process, a lot of people from different fields did not hesitate to sacrifice their time and effort here.

“I’m so grateful to the many actors who appeared as cameos, but truthfully they were more than that,” he continued. “Although the film did not reap commercial success, through receiving this trophy I feel like the film has been accepted [by people].”

Best film and best drama each went to “Samjin Company English Class” and JTBC television series “Beyond Evil.” “Samjin,” directed by Lee Jong-pil, tackles company corruption set in the 1990s, spotlighted by a group of female employees at the lower end of the social hierarchy. “Beyond Evil” received critical acclaims for linking real social issues, such as regional development, into the crime thriller. The series also garnered best actor for Shin Ha-kyun and best screenplay for writer Kim Soo-jin.

Best actress award went to Kim So-yeon for her performance in highly popular SBS series “Penthouse.” It was the first time for both actors Kim and Shin to receive a trophy at the ceremony. Best actor and best actress award in the film division each went to Yoo Ah-in and Jun Jong-seo for their roles in “Voice of Silence” and Netflix film “The Call,”  respectively.

Best supporting actor and actress award in film went to Park Jung-min and Kim Sun-young from “Deliver Us From Evil” and “Three Sisters.” In television, the same awards went to Oh Jung-sae and Yeom Hye-ran from tvN series “It’s Okay to Not Be Okay” and OCN series “The Uncanny Counter.”

Seo Yea-ji and Kim Sun-ho were voted by fans in TikTok to receive TikTok Popularity Awards, but did Seo not show up at the ceremony due to her recent disputes involving her ex-boyfriend Kim Jung-hyun.

The award ceremony has been held without an audience from last year, as a precautionary measure against the Covid-19. The participants were all spaced apart according to social distancing and wore masks.