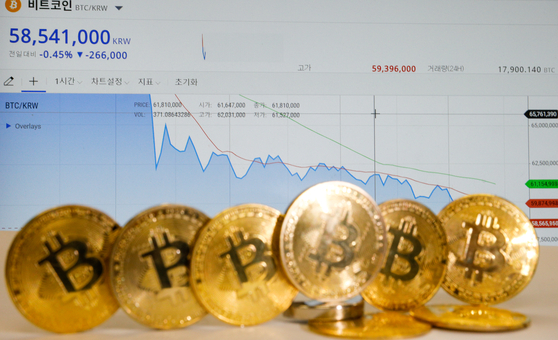 Bitcoin is being traded at the 58 million won ($51,500) level on Sunday at local cryptocurrency exchange Bithumb. The coin's prices had plunged from over 71 million won after Tesla CEO Elon Musk tweeted Wednesday the company will not be accepting bitcoin for car purchases, reversing his earlier comments that the carmaker will support bitcoin as payment. [NEWS1]


The falling price of bitcoin and its shrinking share of the global cryptocurrency market has raised concerns of a potential repeat of the 2018 cryptocurrency crash.

As of 3 p.m. Sunday, bitcoin traded at 60.2 million won ($53,400) per coin on Upbit, Korea’s largest exchange by trading volume. The coin recovered some losses after falling to as low as 57.9 million won Sunday morning.

Just a week ago, on May 9, bitcoin prices passed the 71-million-won mark on Upbit.

However, prices plunged soon after Tesla CEO Elon Musk on Wednesday tweeted Tesla will not be accepting bitcoin for car purchases, reversing his earlier comments that Tesla would accept the coin.

Bitcoin prices have not recovered since Musk’s remarks.

How much Tesla’s turn has impacted bitcoin investors is unclear, but bitcoin’s dominance in the global cryptocurrency market, in terms of market capitalization, fell to 40.18 percent as of 3:30 p.m. Sunday, according to CoinMarketCap. Just last month, on April 26, the coin’s dominance was above 50 percent, at 50.15 percent.

While this could be an indication that investors have become more confident in investing in a wider range of cryptocurrencies other than bitcoin, including prominent coins like dogecoin, some analysts warn that this could be a sign of bubbles in the cryptocurrency market with retail-driven demand chasing quick gains leading rallies in alternative coins.

Alternative coins refer to tokens other than bitcoin.

There are differing views, however, on Tesla’s move and the recent waning market dominance of bitcoin.

As Musk had said he is looking for more environmentally-friendly coin options than bitcoin, which consumes a massive amount of energy during mining, on his Wednesday tweet, all eyes are on which coin will become his favorite pick.

One possible option is Cardano.