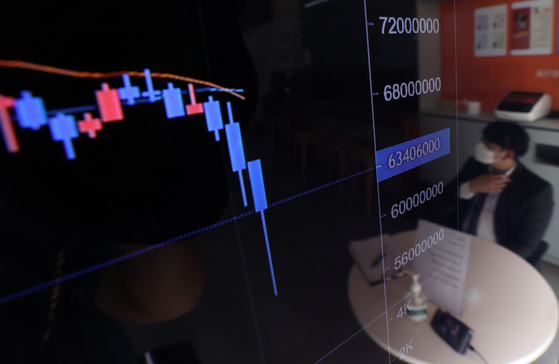 Bitcoin prices plunged following comments by Tesla CEO Elon Musk that the company will not accept the cryptocurrency for the purchase of cars.

The prices bounced back to around the 63-million-won level at both Korean exchanges as of 2 p.m.

Alternative coins including ethereum and dogecoin suffered similar losses following the decline of the largest cryptocurrency.

Ethereum plunged by roughly 8.8 percent over 24 hours at 2 p.m. Thursday according to CoinMarketCap, trading at $3,951 per ether. Dogecoin fell by 9.9 percent over the same period to trade at $0.44 per coin.

"As the news that Tesla will accept bitcoin for purchase of its cars boosted up prices of the coin, the change of mind by Musk drove down prices," said analyst Han Dae-hoon of SK Securities.

Han said it is too early to think that Musk has changed his positive view on cryptocurrencies.

Musk did say in his tweet that Tesla will not be selling bitcoin it holds, adding "cryptocurrency is a good idea on many levels, and we believe it has a promising future."

He also said that the electric car maker is looking at other cryptocurrencies that consume less energy in mining and during transactions.

"Musk's decision could be affected by the global movement towards adopting guidelines related to environmental, social and governance management," Han said. "He could also be thinking of keeping bitcoin as an asset and adopting other cryptocurrencies for transactions."

Bitcoin prices have been vulnerable to comments by big-name coin supporters like Elon Musk or by financial regulators.