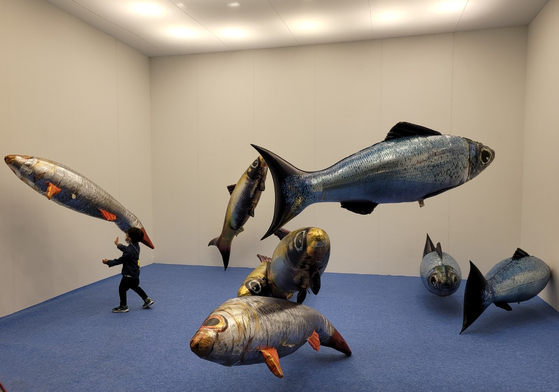 A child plays with fish balloons, which are an artwork by the world-famous French artist Philippe Parreno titled “My Room is Another Fish Bowl,” at the booth of the London-based gallery Pilar Corrias during the Art Busan fair’s VIP preview on Thursday. The booth is part of the special exhibition sections of the fair, which was held at the Bexco convention center in the port city from Thursday to Sunday. [MOON SO-YOUNG]


The 2021 edition of Art Busan, which emerged as one of Korea’s top art fairs in the last decade, wrapped up on Sunday afternoon. The fair was crowded with visitors through the weekend, as the Korean art market entered a booming cycle. The fair received more than 15,000 people during Thursday’s preview and then saw more than 25,000 visitors per day. The participating galleries also showed good performances. A painting by the modern art master Marc Chagall, the most expensive artwork offered in this art fair, was sold for 2.5 billion won ($2.2 million) on Saturday at the booth of the Hong Kong-based SA .  Two sculptures by the renowned British artist Antony Gormley were sold during the preview at the prestigious Galerie Thaddaeus Ropac from London. Berlin-based Peres Projects sold all its exhibited works during the preview and exhibited new works the next day. Korean galleries also saw paintings by local modern art masters such as Yoo Young-kuk and Kim Tschang-yeul sell quickly during the preview.