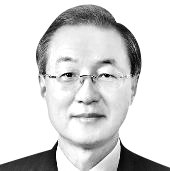 The World Trade Organization (WTO) launched in 1995 in lieu of the GATT added e-commerce to its context after a surge in cross-border transactions of products and digital content via the Internet. In the second ministerial meeting in Geneva in 1998, WTO members agreed not to levy tariffs on electronic transmissions. About 86 WTO members, including the United States, the European Union, China, Japan and South Korea, have lately held discussions on setting new rules for global e-commerce, but no substantial progress has been made.

Through the development of ICT, the concept of e-commerce has expanded to digital trade. It now includes not just e-commerce, but also the cross-border migration of digital goods produced for commercial purposes and data created for commercial values. Although the international definition of digital trade is yet to be established, it can be divided into three categories. The first is the international trade of goods and services through internet platforms (as in the case of Amazon). The second is the international trade of digitalized products of existing products and services (e-books) or products providing digital services (cars with remote-control digital systems) or services with such functions (app-based booking of lodging for overseas trips). The third is cross-border migration of data for the analysis, collection and processing of information with innate commercial value, like Facebook. 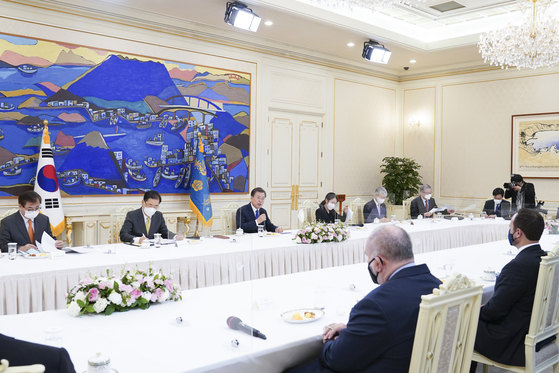 President Moon Jae-in presides over a meeting at the Digital Cooperation Forum with representatives of four Latin American countries in the Blue House on March 16.

It is hard to estimate the size of the digital trade market since digital services are often included in traditional trades. A Boston Consulting Group report estimated that the amount of global digital trade would be $800 billion to $1.5 trillion, which accounts for 3.5 percent to 6 percent of global trade. Trade experts expect the weight and scale of digital trade to expand rapidly through the swift digitization of economies after the Covid-19 pandemic.

Digital trade could receive a fatal blow if states move to restrict cross-border transmission of data or take steps to place data servers in their territories. The EU has been restricting personal data transfers beyond its jurisdiction for piracy protection while China demands data stays within its territory for national security reasons. The EU has also begun to levy so-called digital taxes on revenue made by multinationals through digital trade and services. The U.S. is strongly opposed to such regulations that can seriously dampen digital trade activities. As such, the U.S., EU and China differ in their approach to digital trade.

Korea also must establish its position on issues related to digital trade. The government, companies and experts must first assess the progress in the digitization of the economy and corporate sector to set future directions. Based on the assessment, the government must devise specific policy outlines for national interests followed by the legislature’s enactment of related laws to back government policies. Furthermore, Korean companies must ready counteractions in response to digital policies of key economies like the U.S., EU and China.

At the same time, the government must continue with endeavors to better reflect our interests on the international stage. It must proactively take part in discussions on setting multilateral trade rules and also join the Comprehensive and Progressive Agreement for Trans-Pacific Partnership, which already includes digital trade rules, or separately seek digital free trade agreements with major economies. A digital trade deal needs to be struck with Asean nations like Indonesia, Malaysia, Thailand, Vietnam and the Philippines, which have huge digital trade potential for Korean IT companies.

Digital trade is expected to proliferate rapidly in diverse forms to fundamentally change the global trade landscape. For instance, if 3D printing develops further, it is projected to replace much of the trade of traditional factory goods. Companies as well as the government and legislature must be prepared for sweeping changes in international trade driven by digital trade.