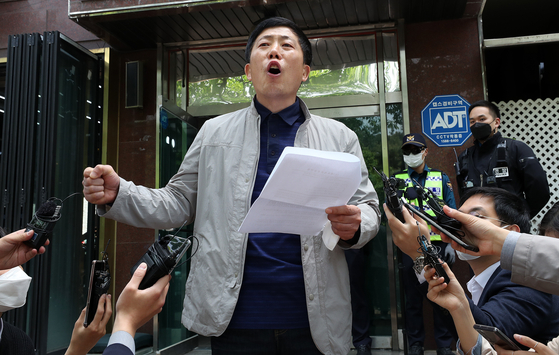 North Korean activist Park Sang-hak denounces a police raid on May 6 to investigate the group's claims of having sent leaflets over the demilitarized zone into the North. [YONHAP]


Gyeonggi provincial government announced Monday it would seek to block all attempts to fly anti-Pyongyang leaflets by balloon across the inter-Korean border by ramping up enforcement of the ban on such activities.

The provincial government’s announcement follows claims by Park Sang-hak, a North Korean defector, who said he dispatched leaflets from near the demilitarized zone into North Korea.

Through a video conference with mayors of cities and counties which border the DMZ, the Gyeonggi provincial government agreed to create a cooperative body to send patrol squads composed of municipal and county employees to strengthen surveillance along the border to enforce a ban on leaflet activities.

The Development of the Inter-Korean Relations Act imposes a fine of up to 30 million won ($27,000) and a jail term of up to three years for sending leaflets, USB sticks, Bible excerpts and money across the 38th parallel into North Korea via balloons. The law came into effect in late March.

Despite the law, however, North Korean activists such as Park have insisted they will continue sending information by balloon into the North.

Gyeonggi Vice Governor for Peace Lee Jae-kang, who is responsible for the province’s involvement in inter-Korean projects, visited a police precinct near the border in Paju on Friday to inspect areas where activists have previously launched balloon leaflets and pre-emptively declared possible launch locations as danger zones.

During his visits, Lee called leaflet-launching activities “acts which mock the rule of law in this country and threaten the safety of residents in the border areas” and vowed that Gyeonggi would “completely block all attempts to fly leaflets across the border with all the administrative manpower that can be mustered by police, border cities and counties.”

“In addition to undermining inter-Korean agreements, the illegal dispatching of leaflets to the North threatens the lives and property of residents in border regions and is a reckless act which could reignite the flames of war,” Gov. Lee said.

The North has previously cited anti-Pyongyang leaflets for taking aggressive actions against the South, including the destruction of the Inter-Korean Liaison Office last June.