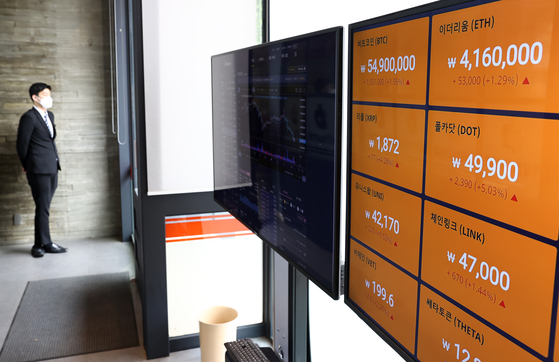 Cryptocurrency prices are shown through a digital screen operated by Bithumb on Tuesday. Bitcoin prices fell to the 54 million won ($47,862) level Tuesday. [YONHAP]

Delays and suspensions at Korean cryptocurrency exchanges are rattling investors, especially as the country has no laws to protect them from losses incurred due to systems errors.

Bithumb posted a note Monday saying all its services will be suspended for five hours from 1 a.m. until 6 a.m. Friday for server maintenance and upgrades. The maintenance comes after a number of delays and system errors reported at the exchange.

The exchange said the work is intended "to provide a more stable service environment." As all services will be suspended during maintenance, it advised investors to "please cancel all open orders before the maintenance period" for the protection of assets and safe trading. 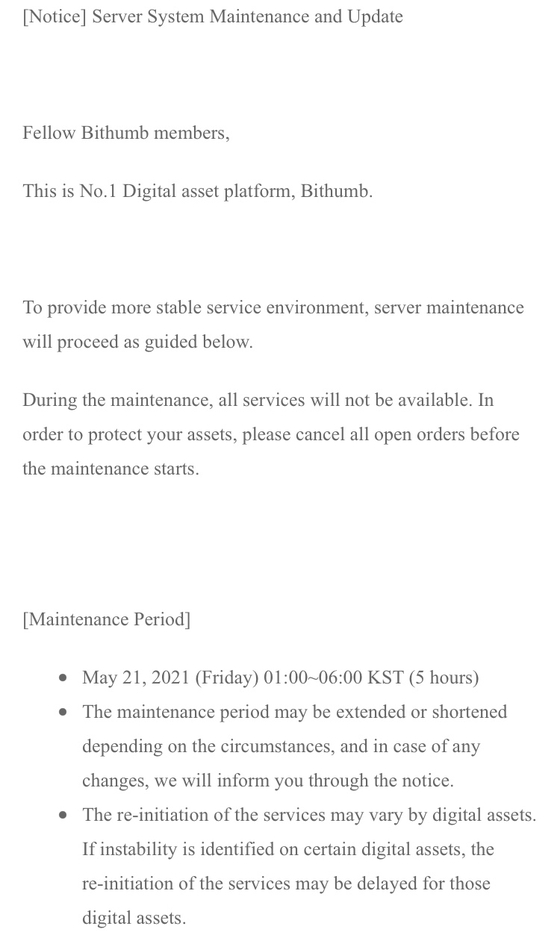 Just this month, 10 cases of delay or temporary suspension of transactions were reported at Bithumb. Delays in processing have driven some investors to other exchanges.

On May 11, both the PC and mobile app versions of Bithumb's trading platform displayed pricing errors.

On May 14, the mobile app was suspended due to heavy traffic.

Upbit, the country's largest cryptocurrency exchange by trading volume, has also faced challenges. It conducted an emergency systems check on May 11 after its main display failed to display real-time price changes of coins.

"The delays take place for various reasons," a spokesperson from Upbit said.

"Delays or temporary suspensions in deposits and withdrawals related to certain coins are mostly due to systems upgrades on the coin-issuer’s side," she said. "In other cases, it has a lot to do with sudden increase in traffic."

The reality is that there are no legal grounds for regulators to monitor activities at exchanges or ask them to compensate investors for losses incurred due to network glitches.

"There is no regulation now, but there are discussions on the need to make one," an official from the Financial Supervisory Service said. "We haven't yet looked into whether each exchange has made its own guidelines to compensate investors as a way of protecting their customers."

Upbit said from its founding in October 2017 to May 13, it has "paid a total of 3.1 billion won in compensation for damages caused in 2,397 temporary system failures."

The exchange listed examples of when it offered compensation. Among the cases were when an investor placed an order, but the order was not processed due to system failures, and the investor ended up buying coins at a higher price by reordering. In this case, Upbit said it will compensate the difference. Bithumb also has its own guidelines for investor compensation.

Despite such guidelines, it is difficult for traders to take every case to the exchange and ask for compensation as they need to prove the direct relationship between system error and their loss.

As investors, especially those in their 20s and 30s, heavily invest in cryptocurrencies, lawmakers from the ruling and opposition parties are proposing bills to tighten up the regulation of exchanges and assess coins prior to listing for investor protection.