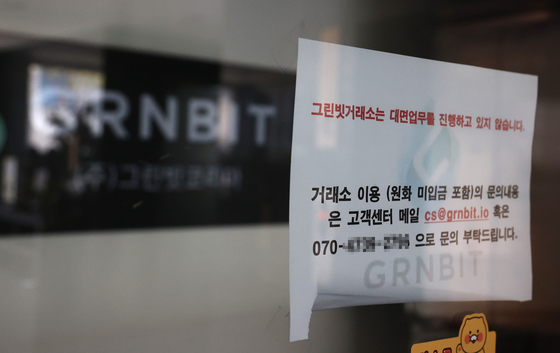 A notice at a cryptocurrency exchange in Seoul on Friday reads it is ending business as it failed to meet requirements set out by the government for it to continue operating beyond Sept. 24. [YONHAP]


Sept. 24, 2021 will be remembered by some local cryptocurrency fans as doomsday as some 30 exchanges were forced to close and another two dozen became the walking dead with a big chunk of their business now forbidden.

It was the deadline for exchanges to prove they have met all the government requirements to keep operating as stipulated in an amendment to the Act on Reporting and Using Specified Financial Transaction Information, a law intended at preventing money laundering, which came into effect on March 25 with a grace period of six months.

Only four exchanges were able to meet two major requirements of the law to continue operating a full range of services.

One is to partner with a bank that agrees to issue accounts in the name of the actual traders of cryptocurrency. The other is to obtain an Information Security Management System (ISMS) certification from the Korea Internet & Security Agency, which ensures exchanges have achieved a certain level of information security.

Partnering with banks was a particularly difficult quest for most exchanges as banks were very reluctant to take on the risk of working with exchanges that could be used for money laundering and targets of hacking.

Only the largest of local exchanges, including Upbit, Bithumb, Coinone and Korbit, were able to sign deals with banks by the given deadline. Other smaller exchanges failed to ink partnerships.

Can the smaller exchanges make a comeback? Are the survivors assured of some stability now that they have passed muster?

Here are the basics on what happened to local crypto exchanges and what investors should watch out for in their future investments into virtual assets.


Q. Why are crypto exchanges closing?


The National Assembly last year passed an amendment to the Act on Reporting and Using Specified Financial Transaction Information. The amendment came into effect on March 25 this year, with a grace period of six months.

Despite the cryptocurrency boom in 2017, there was no special law to regulate cryptocurrency trading in Korea. As the Financial Action Task Force, a Paris-based international organization that sets standards to combat the illegal movement of funds, recommended member countries mandate virtual asset service providers to abide by anti-money laundering guidelines in 2019, the Korean government started crafting a legal system covering the illegal financial activities of crypto exchanges and other virtual asset service providers.

The amendment required crypto exchanges to register with the Korea Financial Intelligence Unit (KoFIU), a body under the Financial Services Commission (FSC) responsible for implementing anti-money laundering practices in Korea.

As there was a six-month grace period, exchanges had until Sept. 24 to register with the FSC body to continue operating. Under the amendment, those that fail to register have to cease operations.


Q. Who are the survivors?

It is unclear how many exchanges will survive in the end.

So far, Dunamu's Upbit is the only exchange in Korea that has obtained final greenlight from the government to continue operating.

More exchanges have applied for registration, but assessment on their registrations are still in progress. According to the FSC, the process can take as long as three months.

Upbit is currently the largest cryptocurrency exchange in Korea in terms of trading volume and the number of users. As of the end of August, 8.3 million users traded on Upbit, according to data from the office of Rep. Kang Min-kuk of the main opposition People Power Party released on Sunday.

Bithumb, Coinone and Korbit are likely to maintain their services. They along with Upbit were able to ink partnerships with banks for the issuing of real-name accounts for their clients.

Their partnerships with banks, however, are not guaranteed to last.

Previously, the partnerships were usually renewed on a six-month basis, however, banks have not disclosed the terms and durations of the contracts with the exchanges.


Q. Can other exchanges partner with banks later?

Yes. If they can find a partner bank.

As of Sept. 17, 29 crypto exchanges obtained ISMS certification, which is one of two requirements to register with the FSC body. Even if exchanges weren't able to ink partnership with banks, they are able to register and continue operating if they promise not to offer won-based trading services.

Most small exchanges decided to apply for registration while temporarily suspending their won-based trading service, to win some more time to find partner banks.

But the odds are not good for smaller exchanges.

Even the largest among small exchanges, like Gopax, tried to sign a deal with a regional bank until the very last minute, but ended up announcing on Friday deadline that the exchange failed to and it will operate coin-based trading for now.


Q. Why are banks so reluctant to partner with banks? Don't they earn fees?


Fee business is increasing, but banks are wary of the risk.

Banks have been asking the FSC to free them of liability in the case of fraud or failures at the exchange level if they are not directly involved in the fraud or failure, but the regulator has rejected the request.

Other banks also reported higher fee income but say the profit is small compared to their total earnings.


Q. What if I have cash deposited at exchanges closing won-based trading services?


Exchanges that are closing part of their service were mandated to give a week's notice. The notices generally give a deadline for the end of the service and a time limit for accessing funds. The government has recommended exchanges give a month of time for users to withdraw won from exchanges after closing the won-based trading service.


Q. What if I just found out I have coins remaining in exchanges that are completely closing down?

Technically if an exchange closes down, remaining coins are gone together with the exchange, though rules could differ depending on each exchange's business policies. That's why the financial authorities have been warning investors not to use little-known small exchanges that are likely to close down.

Financial authorities had recommended investors move their coins to safer exchanges before small exchanges close down, though of course, the same coin must be listed on both exchanges for transfer of coins.


Q. What should I do if I can't withdraw my deposits at an exchange?


If an exchange has made no notice about its closure or its compensations for traders, it could be a financial crime. In that case, financial authorities are recommending investors to call the KoFIU at (02-2100-1735), the Financial Supervisory Service (02-3145-7504) or the police (112).