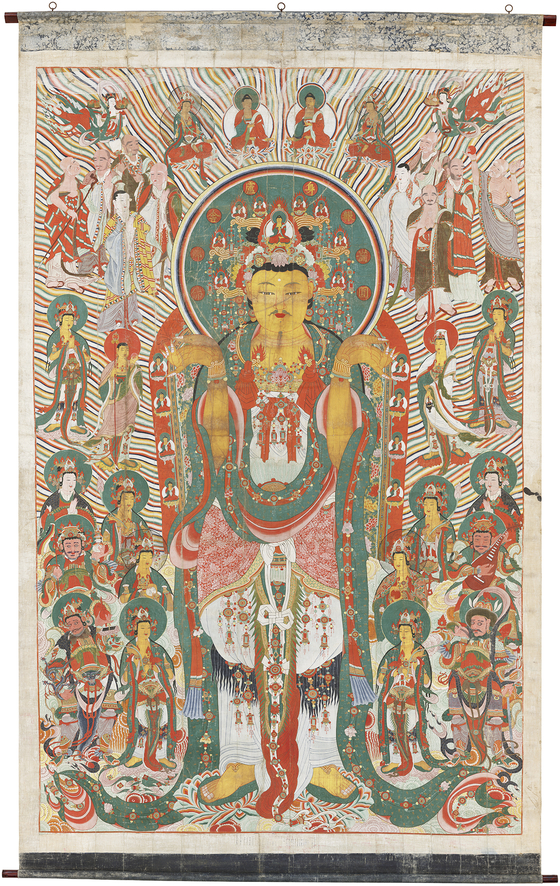 The hanging scroll painting of Rocana Buddha from Sinwon Temple, which is National Treasure No. 299, is being exhibited at the National Museum of Korea for the first time. [NATIONAL MUSEUM OF KOREA]


May 19 is Buddha’s Birthday, a major Buddhist holiday in Korea. Was it not for the coronavirus, people across the country would be gathering together in central Seoul to carry out the grand lantern parade known as Yeondeunghoe.

To offer consolation to those disappointed by this year's scaled-down and canceled events, one Buddha has traveled to Seoul all the way from Sinwon Temple in South Chungcheong, for the first time.

The generous being is Rocana Buddha, depicted on the giant scroll painting of Buddhist deities called gwaebul. The painting is Korea’s National Treasure No. 299. The 17th-century painting has never been taken to Seoul from its permanent home, Sinwon Temple, but an exception was made for the exhibit “The Buddha Illuminates the World,” which kicked off at the National Museum of Korea in central Seoul late last month.

“The painting rarely leaves the temple so it will be a valuable opportunity for many people to witness this gigantic painting hanging in the museum just in time to celebrate Buddha’s Birthday this year,” said Yoo Su-ran, the curator of the exhibit. “We hope people visit the museum to enjoy the illuminating Buddha that’s so grand and bright and it will warm the hearts of people who are feeling weary amid Covid-19.”

The Rocana Buddha was painted in 1664 and is recognized as an outstanding example of Buddhist artwork of the Joseon Dynasty (1392-1910) and a representation of Korean Buddhist culture. According to Yoo, it is painted on a canvas made by joining 19 pieces of hemp cloth together. It measures 10 meters (32.8 feet) high and 6.5 meters wide and weighs over 100 kilograms (220.4 pounds).

“It’s been three and a half centuries since it was created, but the painting still retains its lustrous hues in excellent condition,” Yoo added. 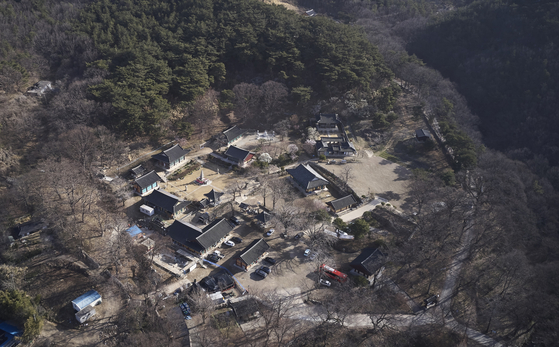 Such large scroll paintings of Buddha were created by monk artists during the Joseon Dynasty to be used during outdoor temple events. When not in use, the scrolls are kept in wooden containers at temple halls so they are not usually available for public viewing.

The Rocana Buddha is featured at the center of this large scroll. He’s wearing a colorfully designed robe adorned with shining beads with a crown on his head. He is surrounded by disciples known as the Four Heavenly Kings and Bodhisattvas, who are gathered to listen to his sermon as he emits a golden gleam.

According to Yoo, Rocana Buddha is one of the “three bodies” of the Buddha, which symbolizes “boundless merit attained through spiritual practice and benevolent behavior over an immeasurable period of time.”

“The overwhelming presence of the Buddha and the festivity of light and colors brimming all over offer a glimpse of the ideal world envisioned by Buddhists at the time,” Yoo added.

At the bottom of the scroll is a list of the names of donors and five monks who were involved in the creation.

The painting of Rocana Buddha will be exhibited at the museum’s Buddhist Painting Hall on the second floor until Sept. 26.

Prior to the arrival of the scroll painting, the museum had been holding a media art exhibition of illuminating Buddhas since early this year. Among some 110 existing gwaebul in Korea, three of them — gwaebul of Buseok Temple, gwaebul of Hwaeom Temple (National Treasure No. 201) and gwaebul of Eunhae Temple (Treasure No. 1270) — have been digitalized and were being exhibited as media art works at the museum.

While the Rocana Buddha painting is on exhibit, the media art works will not be available, but as soon as the scroll painting returns to Sinwon Temple, the media art exhibition will resume, allowing visitors to enjoy different styles of gwaebul. 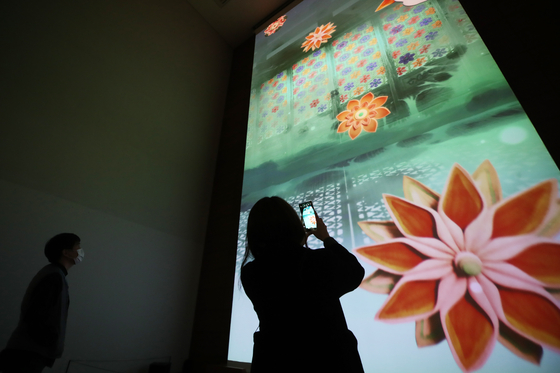 
“To create the moving images of the Buddhas in gwaebul for the media art works, we have created a 3-D model based on the original work and implemented natural movement using motion capture technology,” said an official from the museum.

There's another exhibition that’s been organized at a rare venue for the Buddha’s Birthday.

At Seosomun Shrine History Museum in central Seoul, which usually exhibits works related to Catholicism as it is a memorial venue established to commemorate the martyrs who were executed during Catholic persecutions, a gwaebul from Hwaeom Temple in South Jeolla is being exhibited for the first time. 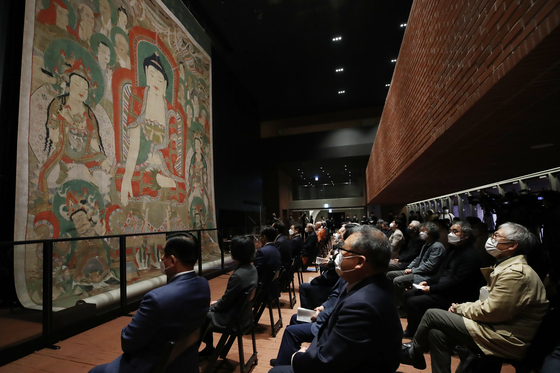 
The painting, titled “The Vulture Peak Assembly,” is Korea’s National Treasure No. 301. It was painted in 1653 and is 11.95 meters high and 7.76 meters wide. It depicts a scene of Sakyamuni preaching as Bodhisattvas and the Four Guardian Kings stand surrounding him. It underwent a two-year restoration which was completed in March.

“I believe this painting is so significant, especially in such a time of a disaster,” said Kim Young-ho, an art historian who curated the exhibit. “That is why we decided to cross the boundaries of religion and allow the painting to be exhibited here to send the message of peace and healing.” The exhibit runs until June 30.