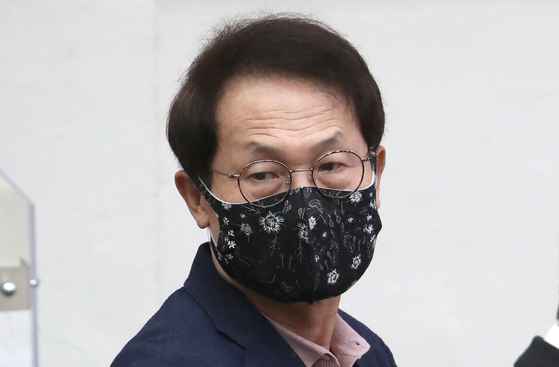 “We have requested the Seoul Central District Prosecutors’ Office to indict Cho on the charges of obstruction of duty and abuse of power,” said the CIO in a statement on Friday.

Cho has been investigated by the CIO for months. The agency, established in 2019 as part of the Moon Jae-in administration’s agenda to weaken the prosecution agency, picked up Cho’s case from the police in late April. It was the CIO's first case.

In April, the Board of Audit and Inspection of Korea (BAI) asked police to investigate Cho.

The BAI said Cho allowed five teachers who were fired for violating the Public Official Election Act to be re-hired in 2018. Four of the teachers were convicted of illegally raising funds for campaigns during the 2008 election for Seoul’s education superintendent. One was convicted of spreading false information about a candidate during the presidential election of 2002, but was pardoned by the Roh Moo-hyun administration in 2007.

The BAI found that at least one of the five was a member of Cho’s staff during his election campaign in 2018.

It was not long after Cho was re-elected in 2018 that he gave orders to the Seoul Education Office to rehire the five teachers, the BAI said. Human resources officers protested the order, saying that one of the five teacher's personal connection with Cho could be construed as preferential hiring, according to the BAI. Cho was said to have told the officers, “There is nothing wrong with hiring them” through a fast-track process, and that he forewent the usual hiring process that involves human resources.

Cho's ramming through of the hires is at the crux of the allegation of abuse of power, and one that the CIO found to be plausible.

“We have found reason to believe that Cho forced the employees to hire [the five teachers], obstructing their duty,” the CIO said in its statement.

The CIO raided the Seoul Metropolitan Office of Education in May and questioned Cho last month.

It also investigated Cho’s chief of staff for alleged abuse of power and asked Seoul prosecutors to indict him.

The CIO has jurisdiction to investigate over 6,500 senior officials, including the president and his or her immediate relatives; senior presidential aides; the National Assembly speaker and lawmakers; the Supreme Court chief justice and judges; the Constitutional Court chief justice and judges; the prime minister, ministers and vice ministers; the prosecutor general and prosecutors; mayors, governors and education office chiefs; and senior police and military officers.

But when it comes to the agency's power to indict, the subjects are limited to Supreme Court justices, the prosecutor general, judges, prosecutors and senior-ranking police officials.

“We will have to coordinate closely with the Seoul Central District Prosecutors’ Office,” a CIO official told the JoongAng Ilbo on Friday.

Cho, in a statement released by his lawyer on Friday, said the CIO's decision to call for an indictment "was made based on assumptions rather than evidence and the truth,” adding that he did not commit any illegality in the hiring of the five teachers.

United to keep the subsidy