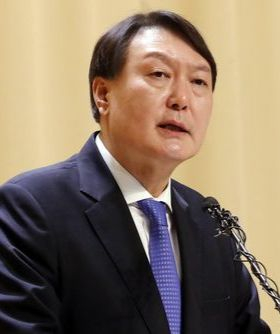 A think tank will be launched on Friday by intellectuals concerned about the current direction of the country and who support the idea of former Prosecutor General Yoon Seok-youl running for president.

Due to speak at the opening debate are Song Sang-hyun, an emeritus professor at Seoul National University who supervised Yoon's master's thesis, and renowned social critic Chin Jung-kwon, a former professor at Dongyang University, who will serve as the keynote speaker.

The campaign think tank will be called the “National Union for the Restoration of Fairness and Common Sense.”

Chung Yong-sang, an emeritus professor of law at Dongguk University who will serve as a permanent representative of the group, told the JoongAng Ilbo in a phone interview on Tuesday that the think tank will aim to “restore and stabilize the collapsed state of fairness, common sense and legal order of the country.”

He added, “We started this gathering with the objective of raising up a great leader to forge a just and fair republic.”

The theme of the think tank’s opening ceremony and debate will be “Yoon Seok-youl, the possibilities and limits of his presidency.”

Yoon, who was appointed prosecutor general by President Moon Jae-in in July 2019, resigned from his post in early March after a protracted struggle with the president’s administration and the ruling Democratic Party's plans to weaken the state prosecution service after it conducted investigations into high profile government figures.

While campaign think tanks are commonly launched to support a presidential candidacy in Korea, the “Fairness and Common Sense” think tank is unusual in that it features Yoon’s name directly in its title while involving little coordination with Yoon himself, who has remained tight-lipped about the possibility of running for president.

Despite not having direct contact with Yoon, those involved in the political think tank say they are convinced he is the man for the top job.

Song, who was a former president of the International Criminal Court, said in an interview that Yoon “is someone who firmly espouses the free market economy” and that he remains in touch with Yoon as his former mentor.

In a phone interview with Yonhap News on Wednesday, an acquaintance of Yoon said, “I imagine that he will not make any announcements about possible political moves until the end of June.”

Likewise, a representative of Yoon told Yonhap that it was “natural that a supportive group of learned individuals should form,” but that he believes that their activities are not directly tied to Yoon.