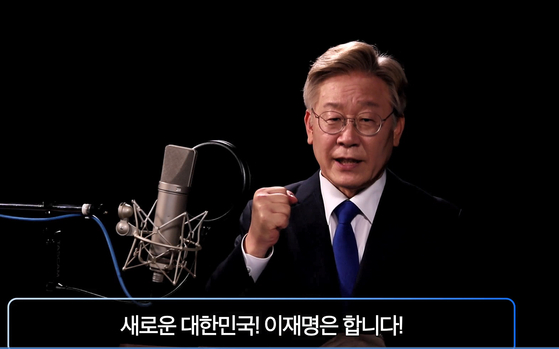 Lee, who is leading in polls by a large margin over the other eight contenders from the ruling Democratic Party (DP), launched his campaign Thursday morning through a pre-recorded video statement posted to Facebook and YouTube.

Lee’s 4,000-word statement was said to have been prepared by the governor himself, according to his campaign.

In his inaugural campaign message, Lee highlighted what he sees as the dangers facing Korean society, singling out inequality and economic polarization as the main threats to the country’s future. “Inequality and economic polarization go beyond creating a crisis of comparative poverty and emotional deprivation. They inefficiently divide resources and diminish economic efficiency, thereby damaging economic growth.”

Arguing that only fairness could address socioeconomic inequality, the governor proposed a state-led economic revitalization plan that would facilitate private sector investment and innovation.

Lee proposed the simplification of market and industry regulations, investment in scientific research, strengthening funding for the arts, large-scale expansion of infrastructure and reorganization of the industrial economy.

Lee also reaffirmed his signature policy to implement a universal basic income if elected president, saying, “By introducing a basic income, I will build a society where anyone can enjoy the minimum economic prosperity and pursue the jobs they want.”

Throughout his speech, Lee mentioned the word “fairness” a total of 13 times and “growth” 11 times.

The Gyeonggi governor’s message on Thursday struck a contrast with his previous manifesto in 2017, when he was running for the DP’s nomination against current President Moon Jae-in.

In Thursday's speech, Lee did not mention any specific figures for his basic income plan. In 2017, he said he would distribute 1 million won ($882) per year to 28 million people.

In his failed 2017 bid to clinch the DP’s presidential nomination, Lee talked about the basic income plan a lot. In Thursday's speech, he only mentioned it once.

The Gyeonggi governor has long led other contenders from the ruling party in public opinion surveys, although he is not the frontrunner overall.

According to a survey released by Realmeter last Thursday, Lee was the second most popular choice for president, polling 22.8 percent compared to former Prosecutor General Yoon Seok-youl, who had 32.3 percent. Yoon announced his presidential bid Tuesday, but it's not clear if he will run as an independent or for an opposition party.

The DP’s next leading candidate is former Prime Minister Lee Nak-yon, who polled 8.4 percent in the survey.

However, as a contender for the ruling party’s nomination with little legislative influence or a strong camp within the DP, Lee faces challenges in winning over the rest of his party to get the party’s presidential nomination.

By running against Moon in the party’s 2017 presidential primary, Lee put himself at odds against members supporting Moon.