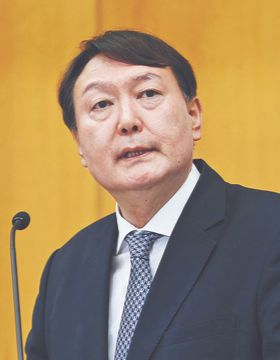 Former Prosecutor General Yoon Seok-youl, a leading potential presidential contender for the opposition camp, will announce whether he will run for president on June 29.

The former chief prosecutor sent a message to reporters through his spokesman on the Thursday, saying he would "tell the people [his] path going forward" at the Yun Bong-gil Memorial Hall at 1 p.m. on June 29.

The message comes 20 days after Yoon made his first publicly scheduled appearance since his resignation at the opening of the Lee Hoe-young Memorial Hall, where he was swarmed by reporters, supporters and detractors.

Since his resignation from the prosecutor general post on March 4, Yoon has remained tight-lipped about his political aspirations.

When asked by reporters at the memorial hall opening if he will announce a bid for the presidency or if he will join a major political party, he responded, "If you watch the path that I am walking, I imagine you will know where I am headed.

"I understand people's expectations and concerns, and I am listening to all of it. I hope you will continue to watch me."

Yoon, who was appointed prosecutor general by President Moon in July 2019, resigned from his post in March after a protracted struggle with the president's administration over the ruling Democratic Party's plans to weaken the state prosecution service after it conducted investigations into high profile government figures.

Yoon’s selection of memorial sites dedicated to renowned independence fighters, such as Lee Hoe-yeong and Yoon Bong-gil, at which to make public appearances appears to carry symbolic significance as a way of tying his potential campaign with revered figures in modern Korean history who fought against oppression.

While Yoon himself has until now remained tight-lipped on the possibility of running for president, a think tank called “Fairness and Common Sense” was launched late last month under the direction of intellectuals who support the idea of the former prosecutor general running for president.

While campaign think tanks are commonly launched to support a presidential candidacy in Korea, this think tank was unusual in that it supports Yoon with very little coordination from Yoon himself.

However, Yoon in recent weeks has taken steps to acquire the usual trappings of a presidential campaign, including hiring an official spokesman and opening a communications office in Yeouido, western Seoul, close to the heart of Korea’s political and legislative processes.

Besides Yoon, the opposition People Power Party appears to be considering Choi Jae-hyeong, chairman of the Board of Audit and Inspection, and former Deputy Prime Minister Kim Dong-yeon as other possible contenders for the party’s presidential ticket.