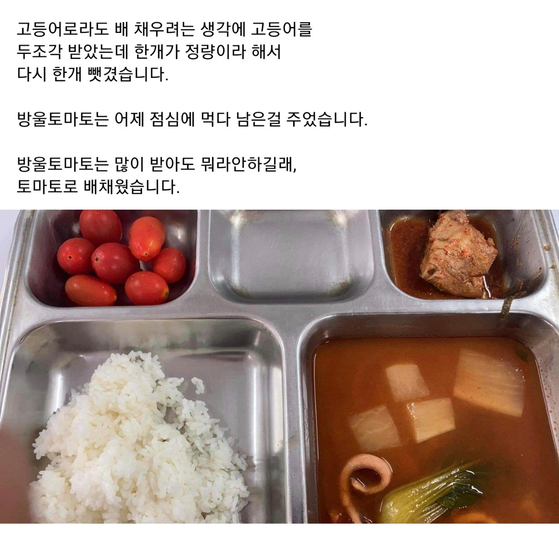 A photo uploaded to the We Tell You What the Army Training Center Won’t Facebook page, shows a meal served to a soldier serving in the 11th Army Division. [FACEBOOK]


Defense Minister Suh Wook called together the top military brass Thursday to discuss the less-than-delectable meals served to soldiers, according to the Defense Ministry.

Suh summoned the chiefs of staff of the Army, Navy and Air Force, as well as all commanders of the Marines, Army corps and naval fleets, to discuss improvements to meals and some other issues.

“Commanders attending the conference this afternoon will review progress on living conditions for soldiers in isolation due to Covid-19 exposure,” said Defense Ministry spokesperson Boo Seung-chan at a regular press briefing Thursday morning. “It will be an opportunity for a general overview of poor-quality meals, which have become controversial, and to examine if there is room for further reforms.”

They also discussed ways to allow soldiers to bring problems to the attention of their commanding officers.

Coming only 13 days after an earlier commanders’ conference on May 7 in which Suh ordered better meals, the closed-door meeting appears to have been convened because of continuing photos uploaded to social media showing not much of a difference since Suh’s command.

On Monday, Suh ordered an inspection of meals on 21 Army bases in South Chungcheong after photos of sub-standard meals were posted on social media by soldiers in isolation.

The Facebook page We Tell You What the Army Training Center Won’t has become a public forum for both former and active-duty soldiers and their loved ones to discuss conditions in the military. It has amassed 146,000 followers to date and posts tip-offs and photos from soldiers on active duty.

A soldier from the 11th Army Division on Wednesday uploaded a post about a substandard meal on the page and wrote, “For lunch I was served rice, soup, mackerel and seven cherry tomatoes.”


After receiving two pieces of mackerel, the soldier said, "They told me mackerel was limited to one piece per person and took the second piece away.”

In response to the post, the 11th Army Division said it would investigate whether the small portions resulted from insufficient food supplies or an error by a soldier serving the food.

Army headquarters launched an immediate investigation into the base in question.