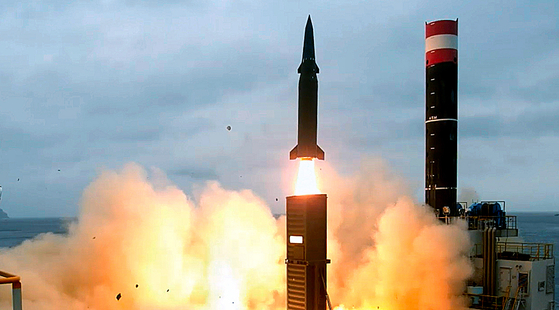 In this file photo, a Hyunmoo ballistic missile with an 800-kilometer-range is fired during a test on Aug. 24, 2017. [YONHAP]

"Our foreign affairs and security team has a determination and a plan to dismantle the Revised Missile Guidelines [RMG] before Moon's presidency ends," the senior Blue House official said in a meeting with reporters in Washington. "I think a positive conclusion can be made about this possibility tomorrow [at the summit between Moon and Biden]."

Moon is in Washington for his first summit with Biden, scheduled for Friday. The two leaders will meet at the White House and have a joint press conference afterward.

Korea's missile activities have long been restricted by limits agreed upon with the United States in 1979. If Moon and Biden agree to lift the guidelines Friday, Korea will have what Moon has previously referred to as "complete missile sovereignty."

"The Korea-U.S. missile guidelines are 42-year-old," the presidential source said. "At the time, we agreed that we would develop missiles under the control of the United States in order to secure the missile technology. Instead, they became fetters. Since Moon took office, our challenge was to figure out how to restore our missile sovereignty."

Seoul and Washington signed the missile guidelines in October 1979 at the end of the Park Chung Hee presidency. At the time, Korea agreed to a 180-kilometer maximum range of missiles in return for technology transfers from the United States. Washington was worried about an arms race in Northeast Asia.

With North Korea's escalating threats from both nuclear and missile programs, a series of revisions followed to the guidelines. The first revision took place in January 2001, which allowed Korea to develop and own missiles with a 300-kilometer range and 500-kilogram payloads.

The second revision followed in October 2012, extending the range of ballistic missiles to 800 kilometers.

Two revisions took place during the Moon administration. In November 2017, the guidelines were revised to completely lift the payload restriction, while keeping the range of ballistic missiles to 800 kilometers.

The latest revision – the fourth – was announced last July. It lifted restrictions on Korea's use of solid fuels for its rocket launches.

Following the fourth revision, Moon pledge to continue his push to secure "complete missile sovereignty" for Korea. While Seoul is currently free from restrictions on payloads and solid fuels, it is still prohibited from developing and operating ballistic missiles with a range farther than 800 kilometers.

The possibility of a joint export of a nuclear plant to a third country is being considered. "There are demands for nuclear plants in the Middle East and Europe," he said. "If Korea and the United States work together, the partnership could be very competitive."

While the Moon administration discusses the export of nuclear plants, opposition politicians have criticized it for its domestic policy of phasing out nuclear power plants. The administration and the ruling party, however, said the nuclear phase-out policy is intended to reduce Korea's reliance on nuclear energy.

Seoul and Washington are also planning to announce that the United States respects a major inter-Korean agreement signed between Moon and North Korean leader Kim Jong-un in 2018, the presidential aide said.

"Korea has contributed greatly to the [Biden administration]'s review of North Korea policy," he said. "The joint statement for the Moon-Biden summit could mention the Panmunjom Declaration to show U.S. respect for inter-Korean relations."

The Panmunjom Declaration refers to an agreement from Moon's first summit with North Korean leader Kim at the Truce Village on April 27, 2018. A nuclear-free Korea, a formal ending of the Korean War and a complete halt to hostile acts toward each other are agreed to in it.

"It means that the United States recognizes not only North-U.S. agreements but also inter-Korean agreements," the presidential aide said.