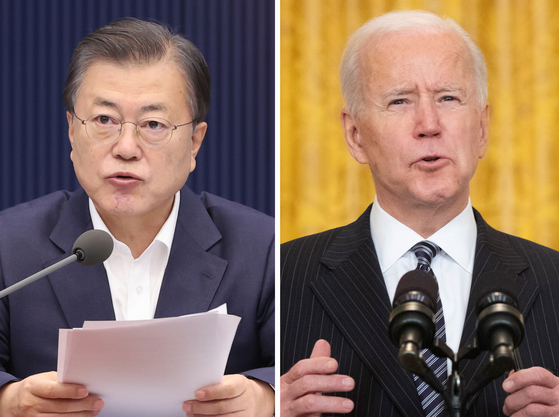 President Moon Jae-in, left, will depart for Washington on Wednesday and have a summit with U.S. President Joe Biden on Friday. [YONHAP]


President Moon Jae-in will depart for Washington on Wednesday for a summit with his U.S. counterpart Joe Biden to discuss North Korea and Covid-19 vaccine issues.

According to the Blue House, Moon will start his trip with a visit to Arlington National Cemetery. He will lay flowers at the Tomb of the Unknown Soldier, Chung said.

Later in the day, Moon will visit Capitol Hill for a meeting with Nancy Pelosi, speaker of the House of Representatives, and other congressional leaders.

Moon will have a meeting with Vice President Kamala Harris on Friday morning. The presidential summit with Biden at the White House is scheduled for that afternoon, and Moon and Biden will hold a joint press conference after their meeting, Chung said.

According to the Blue House sources, the Covid-19 pandemic, especially vaccine supply issues, will be a key item for discussion at the summit.

A senior presidential aide said various methods of bilateral cooperation to supply vaccines to Korea will be discussed at the summit, but refused to elaborate on specific ways to secure the supply.

According to the source, North Korea’s nuclear issue will also be a key issue.

“The United States has recently announced it will seek a diplomatic resolution,” he said. “It has also said it is ready to push forward a bilateral dialogue with North Korea and consider corresponding incentives if the North takes a meaningful step [toward denuclearization]. We see them as an extremely practical and flexible approach.”

Later on Friday, Moon will also attend a groundbreaking ceremony for the Wall of Remembrance at the Korean War Veterans Memorial.

A meeting with Cardinal Wilton Gregory, the archbishop of Washington, D.C. is scheduled for Saturday.

According to a Blue House source, Moon may make a stopover in Atlanta on his way home to visit a factory of SK Innovation.

Moon is schedule to return to Seoul Sunday night. This will be Moon’s first overseas trip since December 2019.