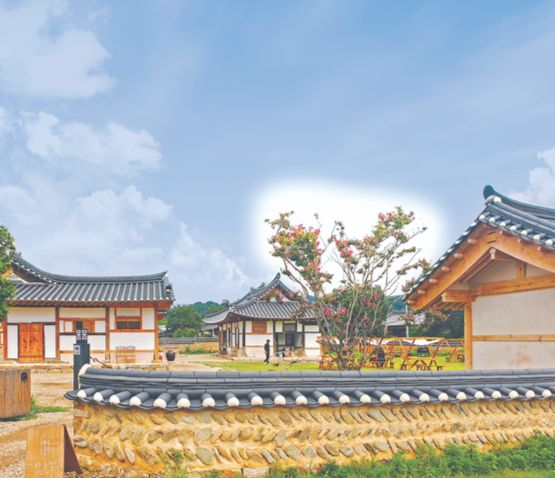 
The population of Mungyeong, North Gyeongsang is set to hit zero in the next 29 years.

As rural populations continue to age with low birth rates and no influx of young people, 105 of Korea’s 228 municipalities face the risk of disappearing within the next three decades, or 42 percent of the total.

Last year, 80,000 tourists visited a cafe in Sanyang-myeon, the smallest town in Mungyeong, inhabited by 4,000 residents. The city’s entire population is 71,000. The town has no other tourist attraction and is simply a mountainous and sunny onion-farming village.

The town’s sudden popularity is thanks to cafe Hwasuheon which was an abandoned hanok (traditional Korean house) for over twenty years. A team of five young men and women flipped the house into a cafe and guesthouse in 2018. Although none of them had prior experience to running a cafe, the business is flourishing. 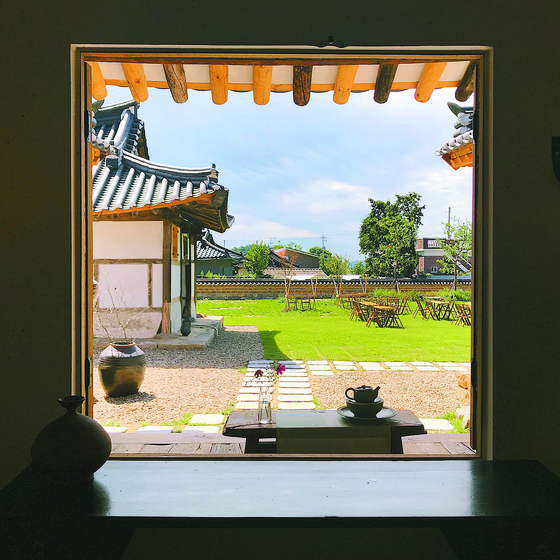 
The JoongAng Ilbo, an affiliate of the Korea JoongAng Daily, visited Hwasuheon on April 22.

The cafe is located in Hyeon-ri, Sanyang-myeon and seems to be in the middle of nowhere, at the village entrance next to vast onion fields. The village of Hyeon-ri has 40 residents, yet attracted tens of thousands of visitors last year despite the Covid-19 pandemic.

The village has historically been a cluster of the Chae family. The hanok named Hwasuheon was built 230 years ago in 1790, but as people started leaving the village, it was neglected. Although a caretaker stopped by now and then, the empty hanok eventually started crumbling down.

The large abandoned hanok right at the village entrance soon became a local nuisance. One construction material dealer offered to buy the house and demolish it, but the townspeople wanted to keep the hanok and decided to call the city for help. 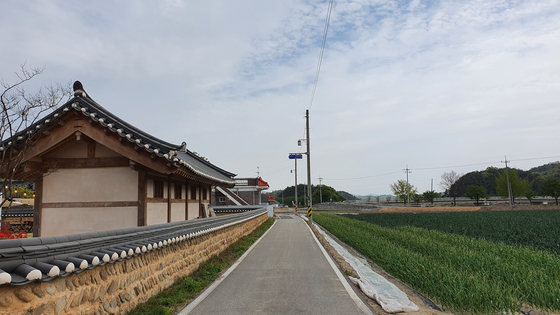 Hwasuheon is surrounded by old houses and onion fields. The village is one of the most rural areas of Mungyeong. [MUNGYEONG CITY]


Manager Um Won-sik of the Mungyeong City Culture and Arts Department picked up the call. He is from Sanyang-myeon and already had an interest in Hyeon-ri.

“Hyeon-ri has many old houses that show the identity of Mungyeong,” said Um. “I was considering designating it as a historic village someday.” To Um, one man’s abandoned hanok was a treasure that embodies the region’s identity.

“When people leave and the houses fall apart, history disappears with it,” Um said. “Compared to other countries, Korea lacks storytelling. Old spaces are crucial for keeping the region’s stories alive.”

Mayor Ko Yun-hwan of Mungyeong also agreed with the significance of the hanok, and the city purchased and renovated it. 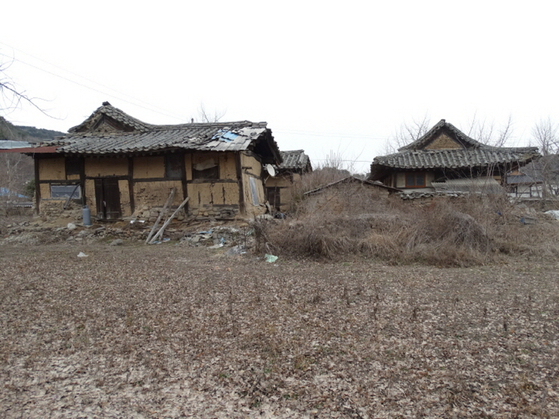 
The remaining question was what to do with it. In 2017, the city actively sought young talent who could make the best use of the hanok.

Twenty-nine-year-old Do Won-woo and 31-year-old Kim Yi-rin are a married couple and members of Replace, the team which turned Hwasuheon into a cafe. Do was born in Daegu and previously worked as an insurance salesman. Kim was born in Busan and worked at an IT company in Tokyo, Japan.

“I was good at my job, but I burned out during my fifth year,” Do said. “I wasn’t sure if I could do it when I got old.”

Do and Kim met in college and were engaged when they were looking for something to do and somewhere to settle down after marriage.


From not-so-hot to hot spot 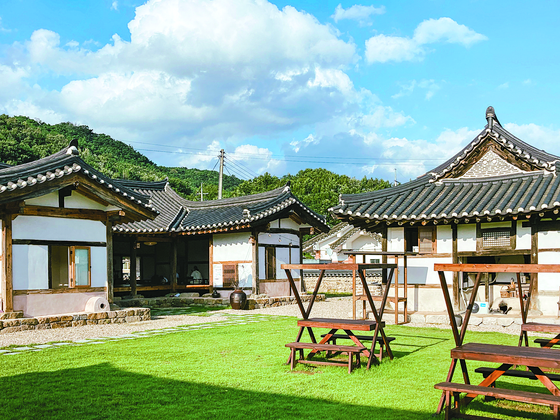 The left building of Hwasuheon was heavily repaired, but the right building retains most of its original form. [REPLACE]


That was when the couple heard about North Gyeongsang’s “Youth U-Turn Jobs Project” (translated), now called “City Youths’ Countryside Dispatch System” (translated), which aims to save the province’s almost-extinct municipalities. The project pays a team of young people, aged between 15 and 39, 30 million won ($26,900) per person annually for up to two years, so that they settle in North Gyeongsang and open a business.

Do and Kim gathered their acquaintances to form the five-member team Replace and joined the project.

They were given the option to settle anywhere as long as it was within North Gyeongsang. The team searched throughout the province for six months. Due to a limited budget, the team mainly looked for abandoned schools, train stations and houses and finally encountered Hwasuheon in Mungyeong.

“Unlike most other towns that were unfriendly to outsiders, the village chief of Hyeon-ri and Mungyeong City were willing to actively help us,” Do said. “So we settled here.”

Despite the fact there was no surrounding commercial district whatsoever, the group decided to target young potential visitors and promote the hanok on social media. 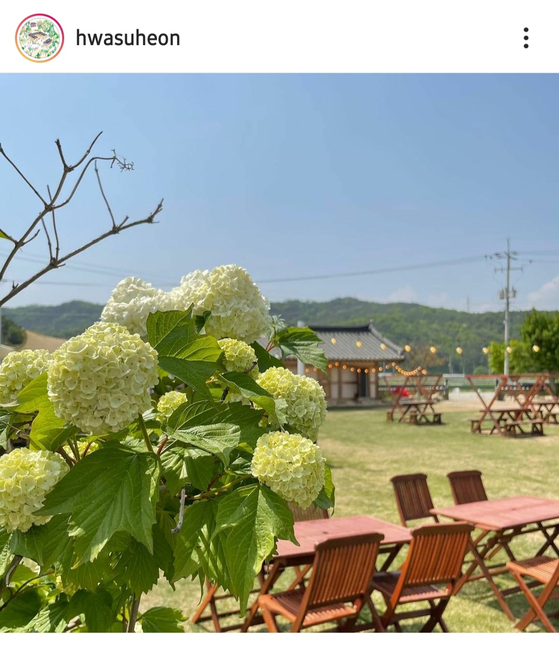 Seats outside the cafe [SCREEN CAPTURE]


They wanted to open a cafe, but none of the team members had any relevant experience. Although the city had renovated Hwasuheon, it was not suitable to be used as a cafe. So Do started visiting spatial planning experts and franchise cafe owners. Whenever Do was rejected, he simply visited the next person and continued learning how to strategically place props and how to decorate the space.

The team developed the food and drink menus on their own, using local produce and telling the story of the region: Eight types of grains from the Mungyeong area are powdered and made into a drink while omija (magnolia berry) ade is made with omija from nearby Dongno-myeon. They are common ingredients, but reimagined with a youthful touch. 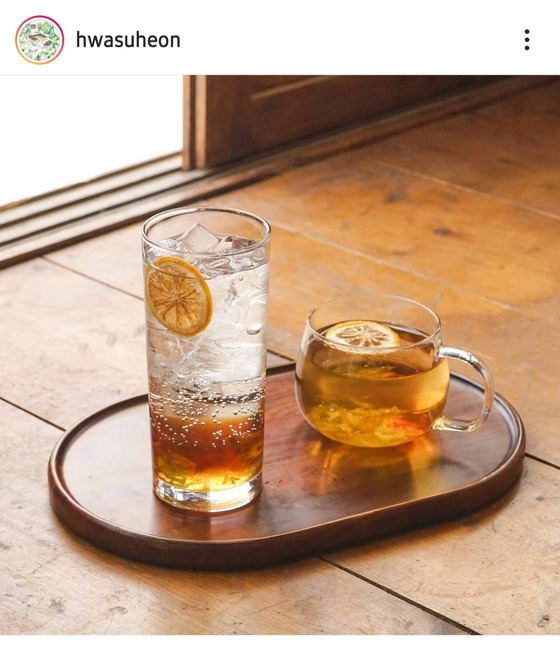 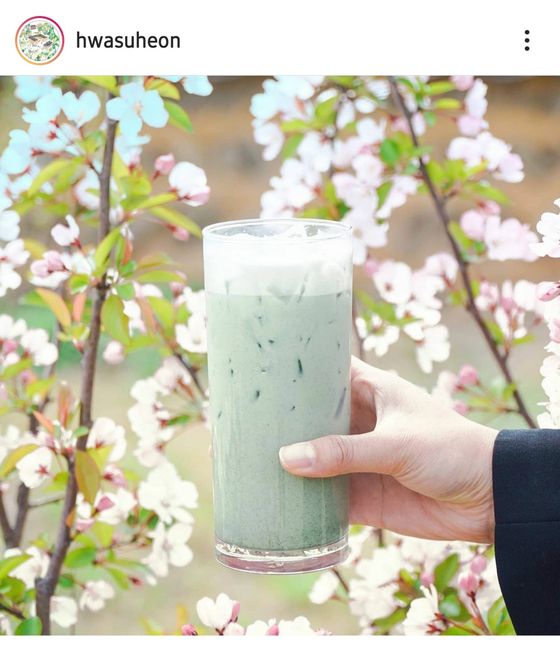 
The hanok cafe slowly gained fame through word-of-mouth. An average of 50 to 100 visitors stop by on weekdays and up to 800 on the weekends. More than 30 percent of visitors come from the Seoul and Gyeonggi regions.

Hwasuheon has added eight employees since opening; two from Seoul and six from Mungyeong.

“I had been wondering if it was worth living in Seoul,” said Lee Seung-hwan, one of the additional employees. “I wanted to try working in the provinces, so I came here.”

The team has also added more facilities. They renovated an old brewery in Sanyang-myeon into a bakery and cultural complex, and a 1940s Japanese-style house into a photography studio. All of those spaces had previously been neglected. 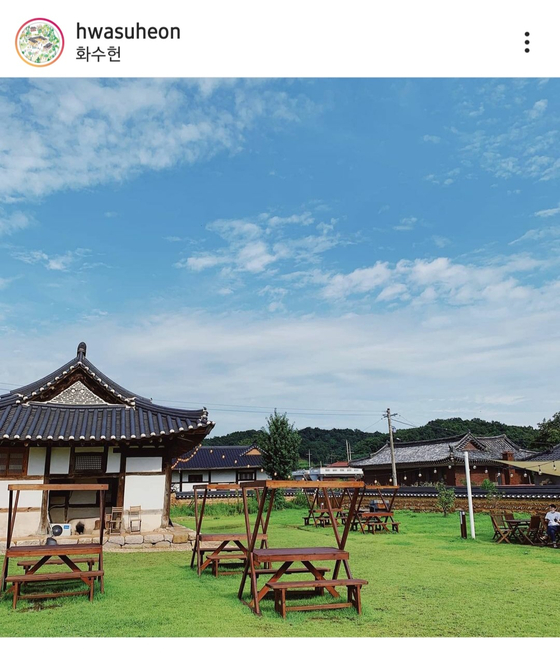 Seats outside the cafe [SCREEN CAPTURE]


While the Replace team was settling down in Mungyeong, CEO Lee Woong-hee of the accommodation startup H2O Hospitality was receiving many requests for help from Korean municipalities.

Lee had developed a platform that automates and enables unmanned hotel operations using information and communications technology, dramatically cutting down on fixed costs. He was consigned to manage Japanese ecommerce firm Rakuten’s hotel chain Lifull Stay — a total of 3,800 rooms — some of which were old abandoned houses Lee renovated into hotels.

“Some [Korean] municipalities made hanok villages for tourism which have ended up neglected, and old houses have become a problem as provincial towns are going extinct,” Lee said.

“There were many requests, but I hesitated to take on the task because I did not feel ready.” 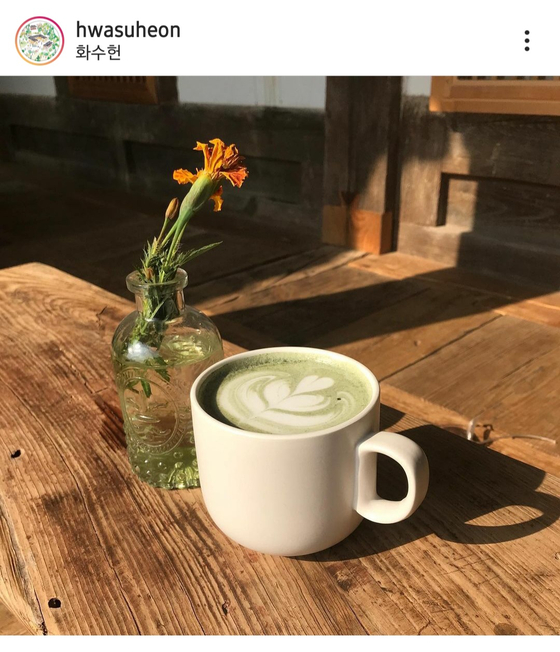 
That was until he met Replace. Lee and Replace will join forces to revive neglected houses and hanok villages, as well as add a storytelling element, with the help of technology. They are currently planning new projects in other parts of North Gyeongsang.

“There is endless material for content in the provinces,” said Lee. “If we discover and refine those stories, I’m sure the younger generation will react.

“The problem of ‘spaces left behind’ in the provinces is very serious. It’s not even empty houses anymore, it’s whole empty villages,” said Um, who first recognized the potential of Hwasuheon.

“I think we need to revive spaces that are necessary to keep the structure of a village, and carry on telling the stories and maintaining cultural identities,” he said. “Then maybe, almost-extinct regions can find a breakthrough.”