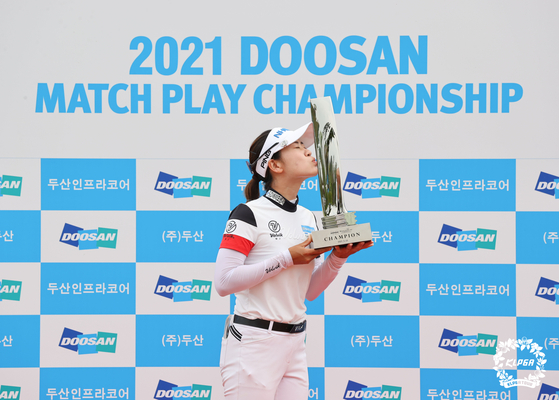 
Park Min-ji picked up her third KLPGA Tour victory of the season at the 2021 Doosan Match Play Championship at Ladena Golf Club in Chuncheon, Gangwon, after a dramatic playoff against Pak Ju-young.

Park finished the final round 3-and-1 against Pak, meaning Park won three more holes than Pak and achieved victory on the 17th hole, not having to play the one last hole because she already had an insurmountable lead.

Park’s third KLPGA win comes just a week after her second at the NH Investment & Securities Ladies Championship last Sunday. Her first win this season was the NEXEN Saint Nine Masters 2021 in April.

Winning the Doosan Match Play Championship, the only match-play event of the KLPGA Tour, Park has now also demonstrated that she is not only good at stroke play but also at match play.

Unlike the more common stroke play, where all golfers compete against each other in attempt to achieve the fewest strokes at the end of all four rounds, in match play, golfers compete to win each hole.

Regardless of the difference in number of strokes, a player earns one point for a win. If the score is five holes to four, the winning golfer is 1-up.

On Wednesday, a total of 64 golfers started off the first round of the Doosan Match Play as 16 groups of four, playing the second round on Thursday, and the third round on Friday.

On Saturday, the 16 winners of each group advanced to the next round, where they played in eight groups of two. Later the same day, the eight winners played as four groups of two. Ji Han-sol beat Kim Ji-hyun, Park beat Jang Su-yeon, Jung Yeon-ju beat Bae So-hyun and Pak beat Park Hyun-kyung. 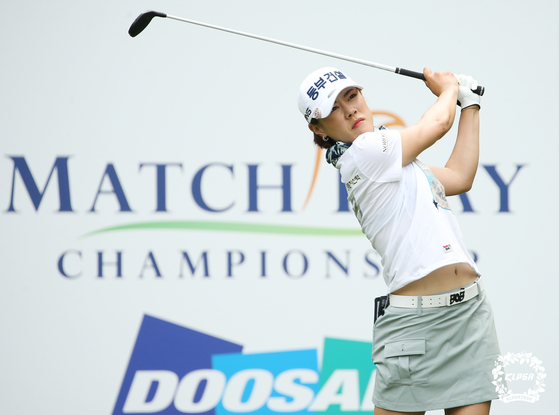 
On Sunday, the four winners of each group played as two groups of two—Ji against Park and Jung against Pak—to determine the two golfers advancing to the finals.

Park won 2-up against Ji, and Pak managed to win the sudden-death playoff on the 19th hole against Jung.

For third place, Ji won 2-and-1 against Jung as Park and Pak went to the final round to compete for the championship title.

After the first nine, it seemed the tide had turned to Park’s side as she had won par-4 second, par-4 fifth, par-3 seventh whereas Pak won just the par-3 third, and was at 2-up against Pak.

However, Pak was not ready to let go of her chance at her first championship victory just yet and won two holes to pull herself up to an all-square in par-5 12th.

Park put herself back at 1-up on the next par-3 13th, but Pak made the scoreboard all-square once again at the next par-4, 14th.

Park's victory boiled down to the last three holes, as she birdied the 15th, made par on par-3 16th and also birdied par-4 17th.

Going in to par-4 17th 2-up, Park was at a clear advantage as she would take away the victory even with a tie.

“I had to concentrate to the very end as Pak is great at come backs” said Park when asked when she had realized her victory.

Park has already won three out of the six tournaments this season.

“My goal this season was three wins,"

“Though it feels like a dream that I achieved my goal so quickly, I now need a new goal of adding another win.” said Park.

The KLPGA Tour will continue with the E1 Charity Open at South Springs Country Club in Icheon, Gyeonggi from May 28 to 30. The upcoming tournament will be played as a three-day, 54-hole event.