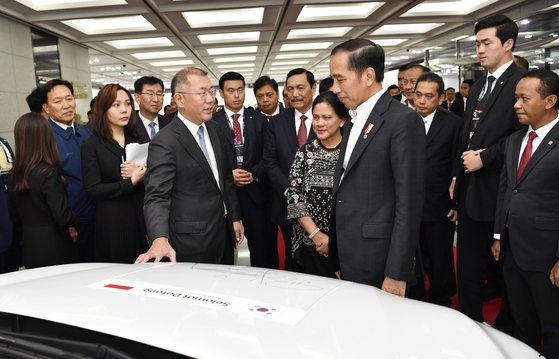 Hyundai Motor and LG Energy Solution will  form a joint venture in Indonesia to make batteries for electric vehicles (EVs), according to industry sources Tuesday.

Manufacturing facilities are expected to be built in Kota Karawang, 50 kilometers east of the country's capital of Jakarta. They will have annual production capacity of 10 gigwatt-hour (GWh), sources say, or enough for 130,000 EVs with 80 kilowatt-hour (kWh) batteries.

Hyundai Motor and LG Energy Solution did not confirm the report Tuesday.

According to CNBC Indonesia and other local reports, Indonesia's Investment Minister Bahlil Lahadalia disclosed the two companies' partnership, saying groundbreaking for the new facilities will take place "in the near future," through an official statement released Monday.

The minister was reported to have said that the batteries will be used in Hyundai Motor EVs.

“Not only creating jobs in the regions, this investment cooperation project is projected to make Indonesia move up from a producer and exporter of raw materials to become an important player in the world's supply chain for the electric vehicle battery industry,” the minister was quoted as saying in CNBC Indonesia.

The Asean region has been relatively slow to adapt EVs but has enormous potential in the long term.

The region's EV market is anticipated to grow 10 percent a year between 2020 and 2025, according to data from global market tracker Research and Markets.

Indonesia has been trying to become a regional hub for manufacturing EVs and their batteries, utilizing its rich natural resources.

Indonesia has the world’s biggest reserves – 21 million tons - of nickel, one of the main materials needed to make a lithium-ion battery, according to data from the U.S. Geological Survey. The agency estimated Indonesia to have produced 760,000 tons of nickel in 2020.

Korean companies have been making foray into the country over the past few years.

Hyundai Motor inked a $1.55 billion investment deal with the Indonesian government in 2019 to build an auto factory in Bekasi, West Java.

The plant will come into operation by the end of this year and plans annual production of 250,000 vehicles by 2030. The plant will produce small SUVs and EVs.

LG Energy Solution also signed a $9.8 billion memorandum of understanding with the Indonesian government last year to build an EV battery factory that is supposed to include all processes from mining of materials to manufacturing the battery.