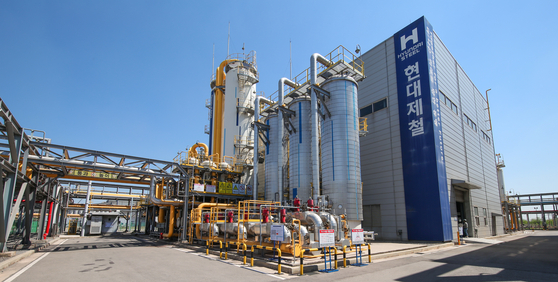 With the transition to carbon neutrality gaining traction, Hyundai Steel is expanding its hydrogen business in a bid to go green.

By securing a stable supply of hydrogen, the steelmaker plans to play a leading role in the hydrogen economy.

Coke, a material made by heating coal, is needed in order to smelt iron ore in a furnace. During manufacturing and combustion of coke, coke oven gas is created as a by-product. Hydrogen factories are where the coke oven gas consisting of hydrogen, tar, sulfur and benzene turns into 99.999 percent pure hydrogen after being refined, compressed and extracted.

Hyundai Steel started constructing a hydrogen factory back in 2014 and began commercial production in January 2016. The factory has production capacity of 3,500 tons per year, which can fuel 17,000 units of Hyundai Nexo — a hydrogen fuel cell SUV — that can each cover a distance of 20,000 kilometers (12427.4 miles).

Half the hydrogen refined at the Dangjin factory goes to the hydrogen station or the semiconductor factory, while the other half is used in the steel plant.

Hyundai Steel plans to expand its production capacity to tenfold by 2025.

“Hyundai Steel is actively promoting resource circulation and recycling with a goal of creating an eco-friendly steel mill,” said Ahn Dong-il, CEO of Hyundai Steel. “We will continue to focus on hydrogen production and the sustainable energy sector, and strive to become the global frontrunner as an environmentally-friendly steelmaker.”