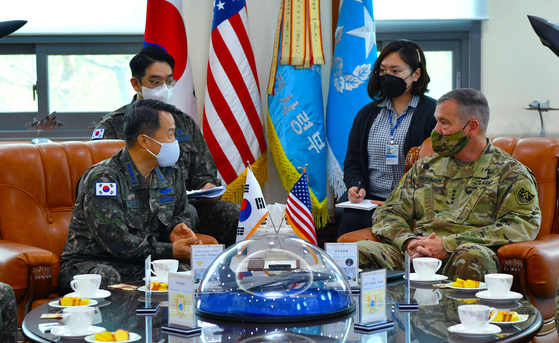 
Shares of domestic arms manufacturers rose Monday and Tuesday after the governments of South Korea and the United States announced last week the lifting of restrictions on South Korean missile development.

Restrictions on missiles made and deployed in Korea were scrapped at a summit between U.S. President Joe Biden and President Moon Jae-in last week. The guidelines, which dated to 1979, kept Korean missiles under 800 kilometers in range and didn't allow solid fuel for propulsion before last July.

With the end of that era, South Korea can essentially develop and deploy missiles of unrestricted range, payload and fuel-type.

The Hyunmoo-4, a heavy-payload ballistic missile in joint development by Hanwha Systems and LIG-Nex1, has an expected range of 800 km with a 2-ton payload. However, the distance of a heavy-payload missile like the Hyunmoo-4 could be extended in the future using the same booster with a reduced payload, significantly expanding the missile’s range to that of a medium-range ballistic missile.

Significant benefits are also expected for the domestic space industry because of the potential application of advances in rocket and missile technologies to satellites and space exploration.

The joint statement by the United States and South Korea following the summit said the two allies agreed “to deepen cooperation in other domains, including cyber and space, to ensure an effective joint response against emerging threats” and to work towards “strengthening their partnership in civil space exploration, science, and aeronautics research.”

Hanwha, which developed the booster for the Hyunmoo missiles, announced May 17 that its aerospace task force will create a joint space research center with the Korea Advanced Institute of Science and Technology to launch an intersatellite-link project.

The space research center will develop technologies that can accelerate the commercialization of private satellites including rocket and satellite-positioning technologies.

However, because of the Defense Ministry’s oversight of the domestic armaments industry, it is unlikely that manufacturers will drastically increase the range of missiles in the immediate future without government support.

Diplomatic considerations are certain to factor into any official decision to expand the missile range.

Korea originally agreed to a 180-kilometer maximum range of missiles with a payload up to 500 kilograms demanded by Washington in October 1979 in return for missile technology transfers from the United States, reflecting Washington’s fear that the authoritarian South Korean government could destabilize the region by sparking an arms race.

The 800-kilometer limit put all of North Korea in the range of South Korean missiles being launched from as far as Jeju.

Should that range be expanded, it could bring neighbors within striking distance of South Korean missiles as well. Indeed, a reduction of the payload of the existing Hyunmoo-4 would increase its range to up to 2,000 kilometers -- enough to reach inland China.

“Increasing the range of missiles requires a policy consensus and thus will take a long time. Results [from the scrapping of the missile guidelines] will not appear immediately,” Prof. Yang Uk of Hannam University's Graduate School of National Defense Strategies told the JoongAng Ilbo.

Yang added,  “Should the government deem it necessary to increase the range of missiles, research can be accelerated to expand the distance to 1,000 kilometers.”