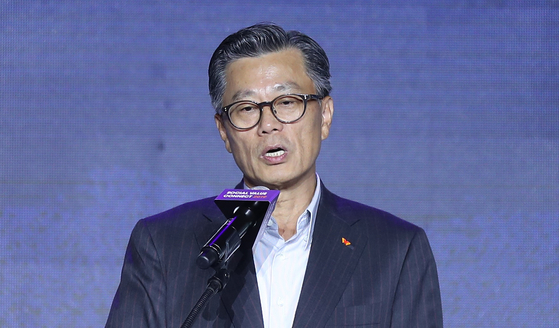 
SK Group's second highest executive was indicted for breach of trust, but Chairman Chey Tae-won was cleared of involvement in the case.

The Seoul Central District Prosecutors’ Office indicted Cho Dae-sik, chairman of the SK Supex Council, for approving an investment of 70 billion won ($62.5 million) in April 2015 in SK Telesys, although the communication equipment manufacturer was on the brink of bankruptcy. The investment led to a massive loss for SKC, a listed chemical manufacturing arm of the conglomerate.

Cho was chairman of SKC's board of directors.

Cho was also accused of approving a 19.9 billion won investment in SK Telesys by SKC in 2012. At the time, Cho was in charge of SK Group’s finances.

Prosecutors allege that Cho colluded with Choi Shin-won, who is now CEO and chairman of SK Networks. Choi was chairman of SK Telesys when the dubious investments were made.

Choi was indicted in March on charges of embezzlement and breach of trust. He was accused of creating slush funds worth 223.5 billion won by embezzling money from six SK affiliates including SKC and SK Telesys.  His trial began in April and he denied most of the charges against him.

Choi is a son of the late SK Group founder Chey Jong-gun and a cousin of SK Group Chairman Chey Tae-won.

Three other SK executives were indicted for involvement in the alleged illicit investments between the affiliates.

“Chairman Chey was in prison in 2015 [when the dubious investment was made],” said a prosecution official. “He accepted the request of Choi Shin-won to invest in SK Telesys in order to avoid any possible conflict with him.”