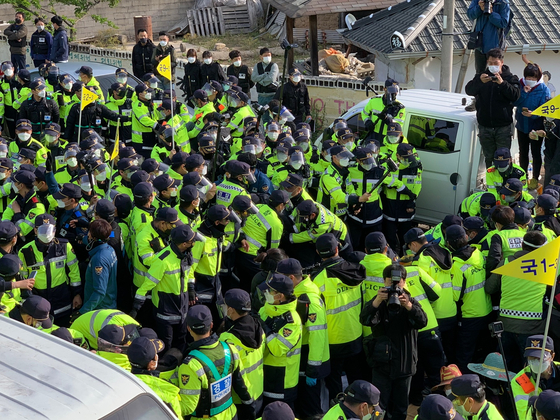 Residents of Seongju County in North Gyeongsang clash with police on April 28 as they block a road as the military tries to deliver equipment to the Thaad base. [KIM JUNG-SEOK]


The county in which the government allowed a controversial American defense shield to be placed was promised 2.2 trillion won ($1.97 billion) in construction and development projects -- but little has actually been delivered.

The Seongju County Office in North Gyeongsang said Sunday that it proposed 17 projects worth some 2.24 trillion won to the government as compensation for the deployment of the U.S. Terminal High Altitude Area Defense (Thaad) antimissile system in its borders in 2016.

Only three, worth around 20 billion, have been accepted by the government so far. They include the construction of a regional agricultural product selection center, and some small-scale rural road expansion and landscaping projects.

Seongju residents are complaining that the government simply informed them that the Thaad system would be deployed, then tried to get them on board with promises that were never fulfilled.

Locals and civic groups have regularly protested whenever the military delivered equipment by road to the Thaad base in Seongju.

There were three clashes this year alone, on Jan. 22, Feb. 25 and most recently April 28 between residents and civic groups and the police and military.

In July 2016, Seoul and Washington jointly announced their decision to deploy the Thaad system in South Korea in response to North Korean threats. Two months later, the Korean Defense Ministry announced a golf course in Seongju County, owned by the Lotte Group, would be the location of the Thaad battery.

Residents of Seongju, known for its melons, protested. Farmers were concerned about risks to health and agricultural produce from the electromagnetic waves produced by the battery's powerful X-band radar. For months, the government tried to persuade the locals to accept the deployment of the battery, offering them various incentives.

Deployment of the U.S. Forces Korea’s (USFK) Thaad battery took place the following year. A radar system and two launchers were installed in Seongju on April 26, 2017, less than two weeks before the May 9 presidential election that brought Moon Jae-in to power. The deployment was fully completed in September 2017.

The Thaad base is currently operated in the form of a “temporary” deployment.

In April 2017, during the Park Geun-hye administration, the defense ministry said it would conduct a small-scale environmental impact survey on the Thaad base that would last six months. In July 2017, right after the start of the Moon Jae-in administration, this was expanded to a general environmental survey, which takes at least twice as long as a small survey.

Because of resistance from locals over the years, Defense Ministry officials said recently they can't improve living conditions of soldiers dispatched to the Thaad base, or respond to U.S. requests to improve the missile defense system's capabilities.

Hundreds of Korean and U.S. soldiers on the Thaad base have been living in makeshift shipping container homes rather than barracks for the past four years because of difficulties delivering equipment and supplies, according to the ministry.

On a visit to Seoul in March, U.S. Defense Secretary Lloyd Austin expressed concerns over the poor living conditions of soldiers at the Thaad base.

The United States has been upgrading its Thaad batteries around the world and integrating the systems with Patriot missiles.

Kim Boo-kyum, the prime minister nominee, said recently, “The residents should understand that basic facility construction is needed for the soldiers,” adding that the government will also “take procedures to ensure that the compensation projects promised to Seongju will be followed through.”

Lee Byung-hwan, head of Seongju County, said in turn, “The people of this county are deeply weary over the past five years from the sudden deployment of the Thaad and want to return to everyday life, so the government across the board needs to show consideration and inclusiveness to unite the divided public sentiment.”