Busan nurse takes her own life after being overworked

Busan nurse takes her own life after being overworked 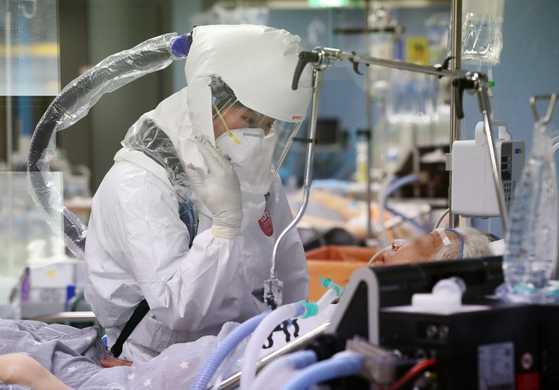 A nurse caring for a patient at a hospital in Pyeongtaek, Gyeonggi, on May 11. [NEWS1]


A nurse took her life in Busan recently after having told family and friends she felt overworked.

“We found evidence that she looked up phrases such as […] brain damage, headache, and suicide by public officials the night before,” a member of a labor union in Busan told the JoongAng Ilbo. The nurse was part of the same union.

The 33-year-old nurse committed suicide on May 23, according to Busan police.

Her family told the police that she “suffered from severe depression” after being overworked at a hospital.

According to the relatives, the nurse was assigned to a hospital in Busan that was running a cohort quarantine system.

“She struggled very much because it wasn’t her turn to be assigned to the hospital, but she was assigned against her wishes,” a relative told the police.

On May 20, the fourth day since her assignment to the hospital, the nurse allegedly told her supervisor that she was being given too many tasks at once.

Her supervisor then assigned two additional nurses to the hospital.

The supervisor did admit, however, that many of the nurses affiliated with the public health care center were being overworked.

“There are 50 nurses affiliated with the public health care center that I am with,” the supervisor told the police. “But they have been stretched thin, because they’ve been assigned, in addition to their normal tasks, to Covid-19 testing centers and to epidemiology centers, and now to vaccination centers. It’s not an overstatement to say that our nurses barely get time off.”

According to the labor union in Busan, the number of complaints from their members about being overworked has been on the rise. Many of their members are civil servants, or medical staff members associated with public health care centers.

“The government is asking public officials here and there to take on additional tasks, and it’s tiring everyone out,” said one member of the union. “We will get to the bottom of the case to find out what were the causes for the nurse’s death.”