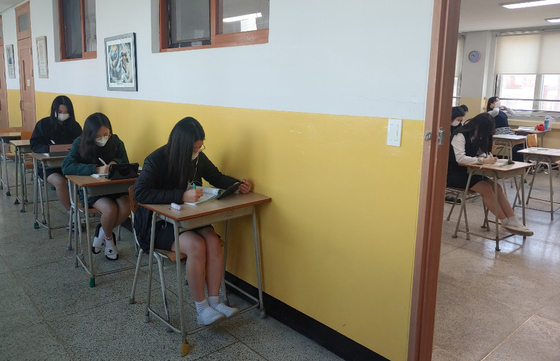 Students of a high school in Cheongju, North Chungcheong, have been divided, for some to take class in-person in the classroom, while others have been located to sit in hallways, to take the class being live-streamed on tablet PCs and other electronic devices, to ensure proper social distancing. [YONHAP]

The Seoul Metropolitan Office of Education proposed on Thursday a supplementary budget of 1.1 trillion won ($983.9 billion), part of which will go toward supplying every middle school student with an electronic device.

“We have set aside some 60 billion won to provide electronic devices for every middle school student in the city, so that they can use them to take classes virtually,” the education office said in its statement on Thursday. “We are hoping to expand the supply to other grades eventually.”

The education office said much of the supplementary budget was planned to help address the needs of students across various socioeconomic backgrounds to ensure equal access to education during the Covid-19 pandemic.

An additional 20.6 billion won will go to supplying schools with the technology needed to stream classes online, according to the education office.

“About 15 percent of schools in Seoul are equipped with such technology,” the office said. “Our goal is to bring that up to at least 20 percent.”

Another 12 billion won will go toward setting up so-called digital media centers in schools, to be equipped with studios to film and livestream classes. A total of 150 schools will be supplied with the centers this time around, the education office said.

“Another 1.7 billion won will help provide schools with courses on artificial intelligence and equip them with the needed programs and facilities,” the office said.

Part of the supplementary budget is geared toward families with working parents or low-income families whose livelihoods have been drastically impacted by school closures from the coronavirus.

“There have been cases where, because of the virus concerns, schools had to close down immediately without prior notice,” the education office said. “And in these cases, we’ve had some students, who rely on school lunches, go hungry.”

A total of 5 billion won will be allotted to ensure that these students don’t go without school lunches even on days when classes are held online. 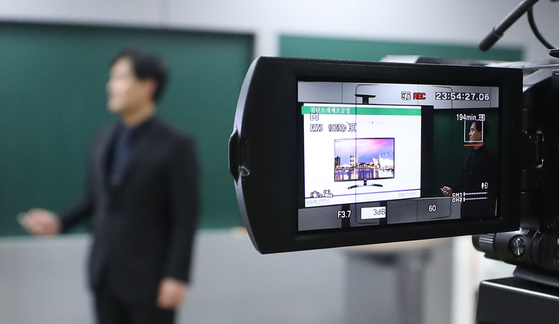 A teacher recording a class to be streamed online in Ulsan in March 2020. [YONHAP]

Another 200 million won will go toward helping low-income families cover their children’s fees at private kindergartens, in cases that they were unable to register for those run by the state. Spaces at public kindergartens are limited, and often highly competitive.


Another 3 billion won has been set aside to support kindergartens and elementary schools to run in-person classes for the children whose parents need to be at work and cannot take care of them when schools close down over Covid-19 concerns.

“We hope that the supplementary budget will help the education sphere get ready for a highly connected and high-tech world, while at the same time ensuring that nobody falls behind [in the midst of the pandemic],” Cho Hee-yeon, superintendent of education of Seoul, said in a statement on Thursday.

“We are in the middle of a crisis, but the crisis can provide us with opportunities to change and adapt the way we learn.”