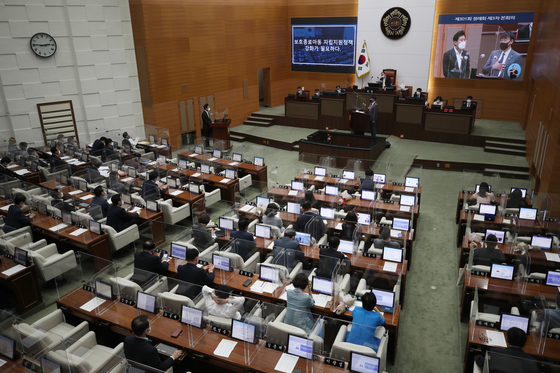 During a regular session on Friday, the council approved a 4.25 trillion won ($3.75 billion) supplementary budget for the city government.

Part of that budget will be used to offer students from low-income families online lectures by so-called star lecturers from private cram schools. This is supposed to help students preparing for the national college entrance exam or boost their grades.

Some members of the city council said the program was a waste of money because the public Educational Broadcasting System already offers free online lectures.

When questioned about those earlier in the week, Mayor Oh said, “We have to think about the gap between ideals and reality – when do you think these students from low-income families were ever able to take classes from such top lecturers [from private cram schools]?”

The city government claims the program will benefit around 110,000 students from low-income backgrounds in the city.

The lectures are part of the "Seoul Learn" program, which had also included a 1.8 billion won plan to equip classrooms with artificial intelligence programs and technology. The funding for the AI programs, however, got nixed by the city council.

“Not all projects that we approved were found completely ready for application, they will need more preparations,” said Rep. Song Jae-hyuk of the ruling Democratic Party, who is also head of the city council's budget committee. “But they were approved nonetheless because we need to act quickly to address some of the pending issues due to the Covid-19 pandemic.”

Yoon and his party make big pledges about 2023 budget