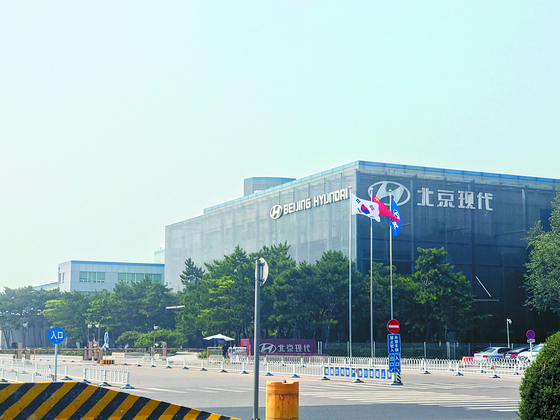 
Hyundai Motor sold its first factory in China, which once symbolized its aggressive expansion into the market, after years of sales held hostage by geopolitics.

The automaker agreed to sell its Plant 1 in Beijing to the government of Shunyi District, a satellite city of Beijing, according to industry sources and multiple media reports both in Korea and China.

“It is true that Hyundai Motor is pushing to sell the Beijing factory to the Shunyi District government,” said an industry source with knowledge of the sale.

Plant 1 was Hyundai Motor's first manufacturing unit in China. Built in 2002, the year the company entered the Chinese market, it primarily built EF Sonata and Avante XD models. It had an annual capacity of 300,000 units.

After it, Hyundai built four more factories: three in Beijing and one in Chongqing.

Before the dispute, Hyundai became a mainstream brand in China with its factories producing over 1 million units yearly in the late-2000s through the mid-2010s.

Hyundai Motor suffered an operating loss of 1.2 trillion won in China last year, up 120 percent from the previous year, while sales contracted 32.7 percent to 6.9 trillion won.

Its market share was 2.6 percent between January and April, according to the China Association of Automobile Manufacturers. In its heyday in 2005, Hyundai claimed 10 percent market share.

With dwindling sales, Hyundai has shifted strategy in China to position itself as a premium brand by releasing its high-end Genesis lines this year.

The carmaker adjusted the models sold there to bigger SUVs from sedans.

The Shunyi District government will reportedly rent the factory to Chinese electric vehicle (EV) startup Li Auto, which will invest 1 trillion won to turn it into its production base.