The search is on among Korea’s top companies for local partners to build the country’s hydrogen infrastructure.

Lotte Chemical, the chemical arm of Lotte Group, is teaming up with SK Gas to commercialize hydrogen that’s naturally produced on their production sites.

On Monday, the two companies signed an agreement to establish a joint venture this year for that business.

Its first work will be setting up hydrogen chargers and building a power plant that generates electricity from hydrogen fuel cells.

The more ambitious goal for the future is producing liquid hydrogen. 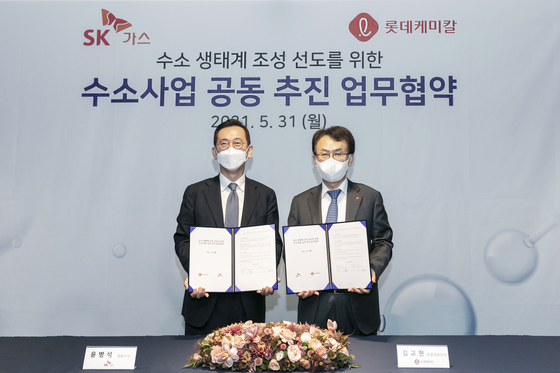 Both companies' operations in Ulsan create hydrogen as a natural byproduct. SK Gas has a head start on hydrogen charging stations because it operates liquefied petroleum gas (LPG) stations nationwide. Through its retail affiliates, Lotte Chemical also has a logistics infrastructure and land that can be used by the joint venture.

“Collaboration between companies is a must for the expansion of a ‘hydrogen economy,’ and we hope our model and the synergy it brings could become an exemplary case,” SK Gas CEO Yoon Byung-suk said in a statement.

Earlier this year, Hyundai Motor Group signed separate partnerships with Posco Group and SK Group. With the steelmaker, it plans to develop hydrogen-powered trucks and source hydrogen from Posco’s factories in Pohang and Gwangyang, South Jeolla. With SK, the two companies are supposed to develop business opportunities in the future while Hyundai supplies hydrogen-powered vehicles for SK affiliates’ factories.

In the past, hydrogen-related businesses in Korea were mainly small and mid-sized companies. Now, big groups are showing interest, especially after the government started pushing to make hydrogen the next-generation fuel to replace combustibles.

Among Korea’s top 10 conglomerates, Samsung, LG and Shinsegae are the only ones that haven’t announced plans in hydrogen.

Partnerships have become something of a trend, which is unusual in Korea considering that most conglomerates have affiliates across a wide range of fields and don't like to share anything with another group.

But the hydrogen infrastructure requires different technologies and areas of expertise, including production, storage, distribution, fuel cell batteries and vehicles that run on the ecofriendly energy source.

Another reason Korea’s top companies are keen on hydrogen is because the market is still young globally, and there is no dominant player yet.

“Countries like the United States with advanced economies are just starting to announce government roadmaps for hydrogen infrastructure,” said Koo Young-mo, a researcher in hydrogen mobility at the Korea Automotive Technology Institute.

“The market has just started to open up. There will be more opportunities for local companies to do business overseas in the field.”