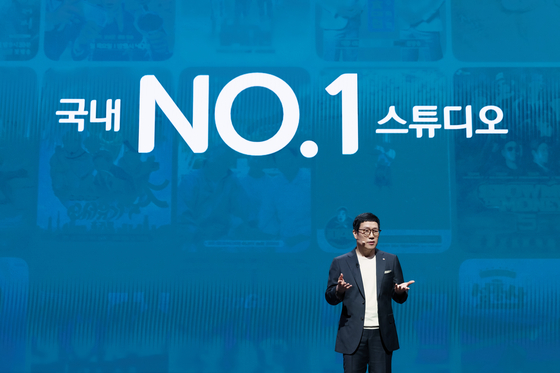 At a press event titled “CJ ENM & TVING Vision Stream,” held both on and offline at CJ ENM center in Sangam-dong, western Seoul on Monday, Kang announced that his company will be investing over 5 trillion won ($4.7 billion) in content production over the next five years, including 800 billion won in this year alone.

The CEO also unveiled his ambitious goal of securing 8 million paid subscribers to CJ ENM’s streaming platform Tving by 2023, with the aim of becoming the No. 1 local streaming platform in Korea. As of March this year, the platform is reported to have 2.65 million paid users and ranks second among local over-the-top platforms (OTT), after Wavve which has 3.94 million users.

Last year CJ ENM was reported to have invested 600 billion won in content production and created 1,500 new shows and series. At the press event, the company emphasized the expansion of intellectual property (IP) in music and drama series.

“[For instance] boy band Enhypen which debuted through our audition program ‘I-LAND’ topped the Billboard World Albums chart and also debuted at No. 18 on the Billboard 200, while Japanese boy band JO1 [which debuted through Korean-Japanese collaborative audition program ‘Produce 101 Japan’ adapted from the Korean audition series aired on Mnet] ranked No. 1 on Oricon and the show’s second season airing right now is also reported to be popular,” Kang said. “We also have global music events such as the Mnet Asian Music Awards and KCON to cultivate our own music IP portfolio.” 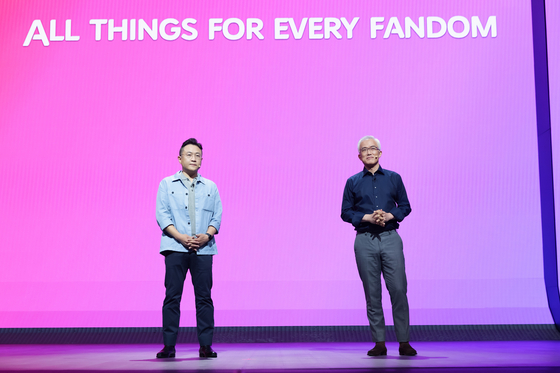 
Tving co-CEO Rhee Myung-han unveiled the slogan “all things for every fandom” in content production, promising that CJ ENM  will do its best to produce and stream a variety of content so that any fan who visits the platform service will be entertained. Rhee also emphasized the company’s partnership with JTBC Studio and Naver. In relation to the latter, Rhee mentioned the highly anticipated drama series “Yumi’s Cells,” featuring actor Kim Go-eun, which is scheduled to air on tvN and be available for streaming on Tving in the latter half of this year. The series is adapted from the mega-popular Naver webtoon with the same title.

“What is the commonality between the following programs: variety shows ‘Spring Camp,’ ‘Famous Singers’ and ‘Idol Dictation Contest’ and drama series ‘Mouse: The Predator’? The highly popular collaborative content between CJ ENM’s Tving and JTBC are all spin-off series derived from their respective original IP. This kind of content provides distinguished entertainment for our viewers and a gateway for us to expand our fandom.

“Moreover, we are planning to expand our franchise IP,” Rhee said. “Over the last decade, what built the foundation of our channel tvN were those seasonal series such as ‘Reply,’ ‘Hospital Playlist,’ ‘Three Meals a Day’ and ‘Journey to the West,’ Take the example of the ‘Reply’ series for instance. The number of viewers increased rapidly, from 600,000 viewers for ‘Reply 1997,’ 1.9 million viewers for ‘Reply 1994’ and 3.6 million viewers for ‘Reply 1988.’ The sustainable value of these series is consistently proven, and we plan to invest more than 50 percent of our budget in developing such IP.”

Tving co-CEO Yang Ji-eul also released figures on the progress of the platform, which was established last October, as a way to show how tangible its goal of reaching 8 million paid subscribers in next three years really is.

“Since its launch, [Tving was acquired by CJ ENM in 2016 and became an independent platform in October last year] the accumulative number of paid subscribers has increased by 63 percent and during the same period the percentage of installations of our app increased by 67 percent, and the number of UVs [abbreviation for Unique Visitors referring to a non-subscriber who visited the platform at least once] increased by 41 percent,” Yang said.

When asked how he defines the relationship between Tving and other OTT platforms such as Netflix, Yang said that Tving no longer sees them as a competitor.

“We’re now in an era where consumers use multiple streaming platforms,” he said. “They now use at least three platforms, even four.”
Yang said that the company sees streaming platforms overseas as a global window for other potential users to be introduced to Tving content.

“Our advantage compared to other foreign platforms such as Netflix and Disney+ [...] is our plan and vision to stabilize our positioning as offering ‘delicious K-content.’ […] We have approximately 700 creators with us under contract and we will continue to fully support the environment that the creators need for them to fully concentrate on their creations.”