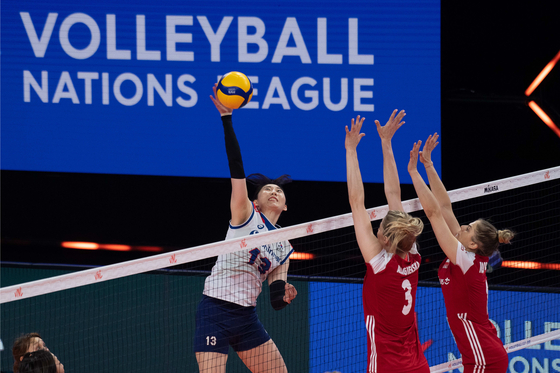 Park Jeong-ah plays the ball in a 2021 Women’s Volleyball Nations League match against Poland on Monday in Rimini, Italy. [FIVB]


Korea’s national volleyball team lost in straight sets against Poland at the 2021 Women’s Volleyball Nations League in Rimini, Italy on Monday. After losing 3-0 to Japan last Tuesday, this is Korea’s second consecutive loss in straight sets.

With captain Kim Yeon-koung and libero Oh Ji-young missing the game to rest, Poland was unstoppable.

Malwina Smarzek of Poland opened the first set with an 84.5 kilometer per hour spike and the tone was set for the rest of the match. Korea tried to keep up, forcing the game into a 36.8-second-long rally, but had to finish 15-25.

Poland continued to dominate in the second set, but Korea caught a break at the start of the third, pulling ahead for the first time in the game.

Poland worked its way back little by little, forcing a 21-21 tie with a great block from Smarzek. With three consecutive blocks, Poland smashed in the last point of the match. Magdalena Stysiak was the top scorer with 18 points.


Pyo Seung-ju scored the most for Korea, with nine, and Park Jeong-ah scored eight.

“The defense was a missing element in our game — we should do it better.” Pyo told Volleyball World after the match.

"We need to serve stronger in the next matches to play our game."

With three losses and one win, Korea sits at 13th out of 16 countries. Korea goes on to face the Dominican Republic today at 12 p.m., or 7 p.m. in Korea.