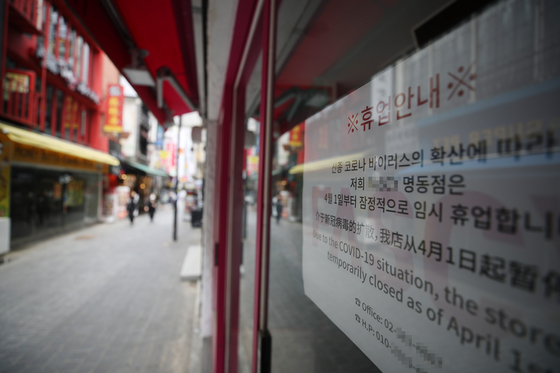 A store in Myeong-dong posted a notice that it is temporarily closing its business on May 23. As Covid-19 infection continues and social distancing regulation still implemented, small businesses especially that have direct contact with customers continues to struggle. Many continued to borrow loans to survive. [YONHAP]


Loans to industry rose 14.0 percent on year in the first quarter with services leading, up 17.5 percent on year, according to a release from the Bank of Korea.

The numbers indicate that some business categories were still challenged by the pandemic and borrowing funds to stay afloat.

Total outstanding industry loans came to 1,435.8 trillion won ($1.3 trillion) at the end of the first quarter.

Companies involved in services borrowed 31.1 trillion won of fresh funds from banks and non-bank financials in the first quarter, taking their total outstanding to 911.8 trillion won, which is 63.5 percent of all loans covered in the report.

Within this category, the pace of loans to certain sub-categories was particularly fast.

For service companies, borrowing from traditional banks was up 13.6 percent year-on-year and from non-bank financials up 27.5 percent. Non-bank financials usually charge more than regular banks and are normally used by borrowers less creditworthy and more desperate for funding.

This suggests that they were more focused on staying liquid than building out their businesses.

Manufacturing companies borrowed to 7.1 trillion won in the first quarter, up 7.5 percent on year. The balance for these companies hit 399.9 trillion won, which is 27.9 percent of the total of all loans to industry.

“As the number of people infected with Covid-19 increased in the first quarter compared to the fourth quarter of last year, the service industry, especially face-to-face businesses, continued to struggle, which resulted in the increase of loans,” said a central bank official.