End of pandemic plus summer equals a run on beachwear

End of pandemic plus summer equals a run on beachwear 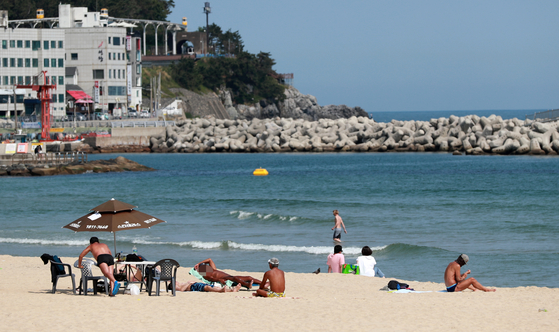 People cool themselves off at Haeundae Beach in Busan on May 31. [YONHAP]


Shoppers are making up for lost time as they anticipate getting the summer they missed last year.

Jeans, T-shirts and swimwear are especially in demand by the legions of Koreans emerging from isolation.

“Last year, I didn’t buy a stitch of clothing,” a 39-year-old Seoul resident said, ticking off a recent order: three pairs of jeans and about half a dozen T-shirts and assorted summery items. “But since it seems like outdoor activities will soon be possible, I decided to buy a pile of clothes to prepare for the summer.”

The dog days of summer seem to be coming earlier, nature accommodating those eager to go casual and get out. Temperatures hit 30 degrees Celsius (86 degrees Fahrenheit) on May 14 this year. In 2020, the temperature exceeded that mark on May 30.

According to Lotte Shopping’s Lotte On, sales of summer clothes like T-shirts started to grow from February. Sales of T-shirts in May increased seven-fold compared to same month a year earlier.

Spending on cosmetics products like lipstick, which didn’t sell well last year, increased two-fold in May on year.

Demand for travel and concert tickets also rose. “Revenge shopping” is one of the contributing factors, as pent up demand results in actual sales as the pandemic recedes.

According to e-commerce platform TMON, accommodation bookings in Jeju between January to May 25 doubled from same period last year. Sales of hotel vouchers were up 124 percent on year, while sales of resort vouchers jumped 95 percent.

Sales of plane tickets to Jeju rose 76 percent between May 1 and May 23 compared to same period a year ago.

Spending on musical and other performance tickets on TMON soared 10-fold this year through May 23 on year, while sales of arts exhibition tickets were up 40 percent.

Retailers are scrambling to attract the enthusiastic customers.

SSG.com is offering coupons for 7 to 10 percent discounts to its all customers. Originally, the coupons were only for VIP customers.

Lotte On on May 28 started a campaign that offers up to a 40 percent discount on a maximum of five summer items per day. The event runs until June 6.

T’way Air offers one-way flight ticket to Jeju at 3,900 won, and rental car companies in Jeju offer mid-sized cars like the Sonata and the K5 at 64,900 won per day.