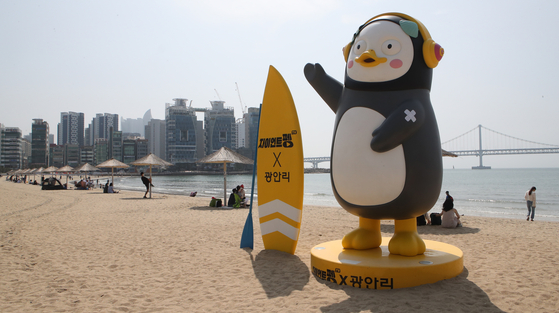 Pengsoo, the penguin, is back on the Gwangalli Beach in Busan with a mark on its arm that shows it has been vaccinated. [SONG BONG-GEUN]

Join the giant Pengsoo statue again this year at Gwangalli Beach in Busan, back again after proving popular among visitors when it arrived wearing a mask last year.

This year, Pengsoo arrived wearing a bandage and without a mask to encourage more people to get vaccinated and then hit the beach. Gwangalli Beach welcomed the third largest amount of visitors in Korea last year with 2.73 million people, behind Haeundae Beach in the top spot and also in Busan with 6.66 million visitors and Daecheon Beach in South Chungcheong’s Boryeong with 2.99 million.

Supported by the government’s comment that there was not a single case of someone being infected with the coronavirus at a beach last year, as well as guidelines allowing people who have gotten at least the first shot of vaccine to be exempt from wearing masks outdoors, it is expected even more people will hit Korea's beaches this summer season.

Busan was one of the first cities to open its beaches on June 1, followed by Taean’s Mallipo Beach which opened Sunday.

However, the rest of the country won't open its beaches until July. Daecheon Beach, the largest in size along the west coast opens on July 3, and the nearby Muchangpo Beach opens on July 10. Taean County in South Chungcheong will open all of its 28 beaches on July 3.

Sokcho Beach will be the first to open among some 90 beaches in Gangwon on July 10. Other beaches in the region will take a cautious approach and decide when to open depending on the pandemic situation and weather conditions.

Jeju Island will open its 12 beaches from July 1 to Aug. 31. South Jeolla, which will have about 56 beaches open this year, will stagger the openings and closings of each in a bid to evenly disperse the number of beachgoers. Goheung County’s Namyeol Beach is the first to open on July 9.

Many of the beaches plan to close at nighttime when it becomes more difficult to check whether beachgoers are following guidelines to prevent the spread of the coronavirus.

Last year, the number of beachgoers fell 60.3 percent compared to the year before, totaling some 26.8 million visitors, according to the Ministry of Oceans and Fisheries.

The heat is on