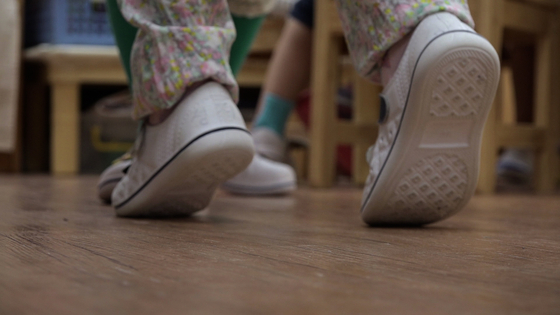 
When director Kwon Woo-jung first heard that her five-year-old child Ji-hoo might have cerebral palsy, she had a difficult time processing the news.

When Ji-hoo was a toddler, she started walking on her tiptoes and when she continued walking this way, Kwon took her to the hospital. Doctors were unable to offer Kwon a definitive diagnosis, saying that it was too early to form any conclusions about Ji-hoo. Instead they advised Kwon that Ji-hoo should take IQ tests annually and that Kwon should stretch her feet daily.


Frustrated, and fearful for her child’s future, Kwon began to seek answers on her own. She started sitting down with parents of children with disabilities and decided to make a documentary about them. But when she showed some of the footage to her acquaintances, they weren’t as sympathetic as she hoped they would be. 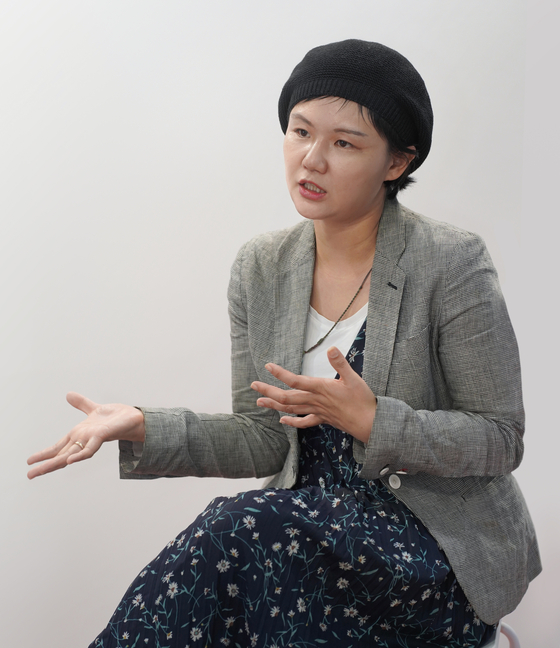 Director Kwon Woo-jung sits for an interview with the Korea JoongAng Daily in Sangam-dong, western Seoul, on May 26. [JEON TAE-GYU]


“What I heard the most from people was that although the lives of such parents were definitely worth talking about, they were so different from their own,” Kwon said in an interview with the Korea JoongAng Daily last week for her documentary “Tiptoeing,” set to be released in local theaters Thursday. “These parents, the interviewees, have already, in their own ways, came to terms with their children’s conditions, which is how they were able to talk about it in front of the camera. But for the viewers, it may seem like they were too refined, calm. So when I thought about how I could reach the audience, I decided to show that process of conflict and difficulties through my own family.”

Kwon says her difficulties did not start with Ji-hoo’s tiptoeing.

“It’s not like my anxiety intensified with the tiptoeing,” she said. “Ji-hoo was born prematurely, and in Korea that means the child, as well as the mother, is labeled. My child was born earlier than usual, and she wasn’t born in perfect health. 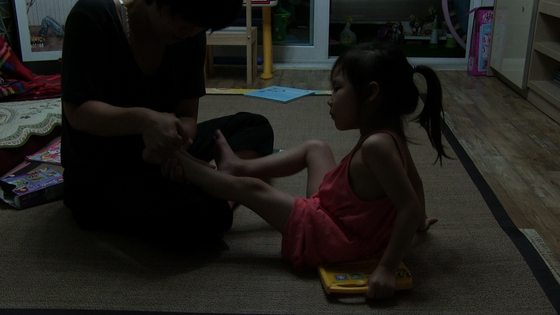 Kwon stretching Ji-hoo's feet in hopes of preventing her from walking on her tiptoes. [CINEMADAL]


"That’s why doctors said that there might be a problem with her respiration which might have been causing her tiptoeing. Although I began to take action about Ji-hoo’s tiptoeing when she was five to six years old, because she was born prematurely, the fear was always there. Any signs that Ji-hoo wasn’t normal spooked me, and on top of that she was tiptoeing. I guess tiptoeing was a symbolic symptom that represented my apprehension.”

The documentary merges Kwon's own story along with the stories of Ji-hoo, her family, their numerous trips to the hospital and rehabilitation centers, and interviews with parents of children with disabilities, and the children themselves.

Through the process of making the documentary, Kwon learned that she was not going to get the answers she was looking from anyone but herself.

“I’ve talked to all kinds of parents who have children dealing with different kinds of disabilities,” Kwon said. “One of the stereotypes that was broken when I was making the documentary was that it is not more or less stressful for parents with children with physical disabilities than it is for parents who have children with personality disorders. The way that they find answers or come to terms with the disabilities has no relation to the degree of the disabilities. It made me think about how I’ve lived and how I see life, my attitude and my philosophy. It derives from my own history.

“So that’s why I had to ask myself the question,” she said. “Why was I so sensitive to my child’s tiptoeing, and the fact that she was born prematurely? It’s because of my own history. For instance, I felt the range of my life growing narrower as I went through marriage, childbirth and childcare. [Before that] my identity as a director gave me huge satisfaction, but as I lost that in the midst of marriage, childbirth and childcare I associated the cause of that deprivation with my family. I felt this compulsion that I could only return to society as a director after my apprehension toward my child was gone.”

While Kwon's own revelations feature heavily in the documentary, the climax of the film, as well as its core message, comes from one of the interviewees, Kim Ji-soo.

“What I wanted to hear from my mother the most is that it’s okay,” said Kim who has cerebral palsy. “What makes it not okay is society and its perspective on the disabled, but that doesn’t mean that I need to be hurt by [or ashamed of] my existence. I get that it’s no one’s fault but I’ve never heard from my mom that I’m leading my life diligently, or she was proud of me.”

“I felt as though I was getting slapped on the back of my head when I heard her answer,” Kwon said. “That is what Ji-hoo wanted to hear from me too. It’s not about telling her ‘don’t tiptoe,’ but rather telling her to tiptoe if that’s what she wants. Or at least, ask Ji-hoo the question, ‘what do you think about tiptoeing?’ but I’ve never even asked her that. That was the moment that made me reflect on how I acted toward Ji-hoo and I felt sorry.”

While attempting to correct Ji-hoo’s walking, she scolds her when she does not immediately follow her directions. As she begins to shout and reprimand Ji-hoo, her face grows darker and she becomes meek and obliging — no longer the bright, bubbly child that she once was in the beginning of the film.

“The bottom line was the doctors said there was a problem with her cognitive skills, so they had to persistently examine her,” Kwon said. “That is why she needs to take IQ tests every year. And if her IQ falls between 60 to 70, then she falls into the range of being intellectually impaired. And [the thought of that] drove me up the wall. I had no standards, absolutely nothing to compare to, so I took it out on my child.” 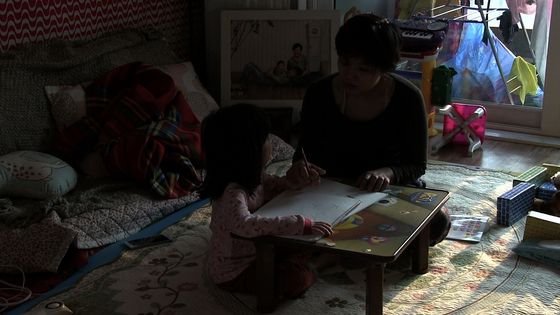 Kwon scolds her daughter when she grows frustrated while teaching her. [CINEMADAL]


Kwon describes this phase in her life as when she became a “monster.”

“My child was entirely susceptible to my fluctuating swirl of emotions,” Kwon said. “When Ji-hoo said things like ‘I don’t think you love me anymore,’ or ‘You are annoyed by me,’ the first thought that popped into my mind was not denial. I felt that Ji-hoo caught me red-handed, which is why I felt so sorry toward her. I was sorry that I projected my anxiety onto her and believed that I could only love her entirely if she was perfectly normal. And she was feeling that, even though I never said it.”

Ji-hoo is 11-years-old now, and she still walks on tiptoes. Doctors are still not sure why. But Kwon, like the other parents of children with disabilities in the film, has come to terms with Ji-hoo’s condition and says that she is once again the bright and energetic child that she was before.

“She is a very funny girl,” Kwon said. “After the screening yesterday, she told me that she wants to receive a fee for her appearance in the film, and she wants an incentive as well. (laughs) The film, in a way, is my confession to her, to say that I’m sorry. It contains my chaotic journey of learning to love Ji-hoo just the way she is.” 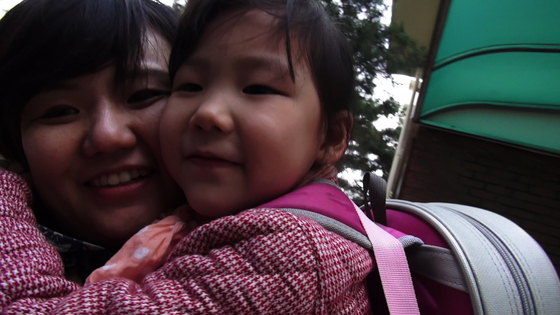 A shot of Kwon and Ji-hoo together from the film. [CINEMADAL]


At the end of the film, Ji-hoo is shown doing all the things that Kwon worried she wouldn't be able to do or nagged her about, such as reading or playing in a playground.

“[Seeing her do those things] made me realize once again that I didn’t give her room to grow for herself,” Kwon said. “I knew it in my head, but I couldn't accept it, I guess. But I think it’s the same for all the parents, they need to be continuously reminded of this notion. The child does not necessarily need to prove herself of her strength to grow to me, right? But adults persistently ask children to do that. That’s what’s so ironic, and something that I try not to do, but it isn’t easy.

“But no matter what kind of child, whether they have disabilities or not, parents face the same predicament [that I’ve faced],” Kwon said. “And I’ve seen cases where children gain the courage to ask their parents about that. That’s what I think is important.”