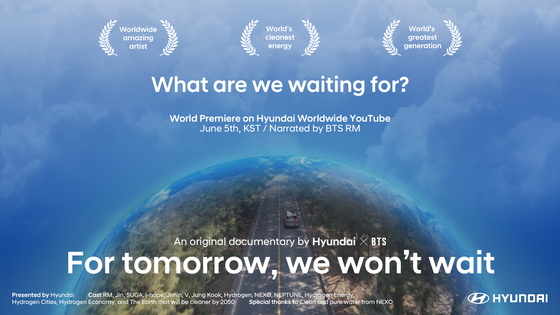 Hyundai Motor on June 3 posted a trailer for “For Tomorrow, We Won’t Wait,” a film to be released on June 5 about hydrogen.

The film features members of BTS and promotes the gas as a fuel.

In the film, RM from BTS discusses with other band members and an assortment of young people the eco-friendliness of hydrogen and how safe and clean it is.

The film will make a case for utilizing hydrogen to reduce carbon emissions by 6 billion tons by 2050 and argue that even the smallest uses of the gas will help achieve the objective, the company says.

The full-length film will be available at 12 a.m. Korea Standard Time on June 5 on YouTube.

Under the slogan “Because of You,” Hyundai Motor and BTS have been running a global campaign to raise awareness about the environment and hydrogen as clean energy since last year.

The Hyundai Motor and BTS “Because of You” clip promoting hydrogen posted on YouTube last year achieved more than 100 million views.

Hyundai Motor is by far the world’s largest maker of hydrogen-powered vehicles. 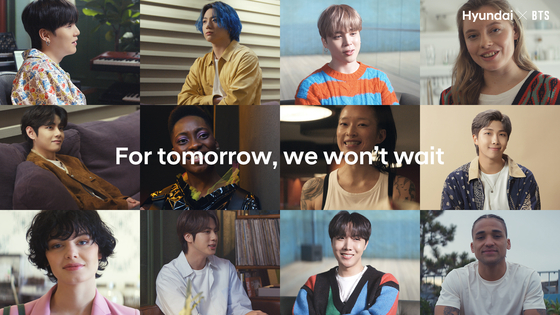 Teaser image of "For Tomorrow, We Won't Wait" collaborated between Hyundai Motor and BTS [HYUNDAI MOTOR]