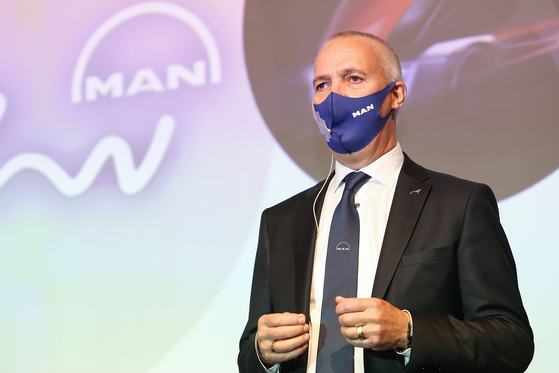 
MAN Truck & Bus has chosen to base its Asia-Pacific regional headquarters in Korea as the country has emerged as the biggest market in the region for the German commercial vehicle company.

“Korea is the biggest market in Asia Pacific region and already was one of our key strategic markets so far,” Goran Nyberg, an executive board member for sales and customer solutions at MAN Truck & Bus, said during a press conference held Thursday in Seoul.

“Now Korea will play an even more important role for MAN and the headquarters and myself will fully support the Korea team.”

The German company also said it will roll out a voluntary recall for its products installed with the Euro 6A, 6B and 6C engines due to possible defects in the engine’s core components such as oil separators and engine brakes.

Some 4,400 vehicles including the TGS cargo truck, TGX tractor and TGS dump truck are affected by the latest recall.

The recall will start in September when the components and other resources are ready, according to Nyberg Thursday. The Korean unit said it will give out more details, such as a specific timeline for the recall, by September.

MAN Truck & Bus Korea also appointed Thomas Hemmerich as the new managing director of the company, with his term starting from July 1.


"I feel a great responsibility to keep the business performance and legacy that has been built up by my predecessor," Hemmerich said. "The first thing I have to focus on as a new managing director is to provide full support for the recall customers. I will work closely together with headquarters as well as the Korea team to make sure our customers will not have any inconvenience while they receive recall."

MAN Truck & Bus also said it will shift 50 percent of its new vehicle sales to electric by 2025, and achieve net zero emissions by 2030.