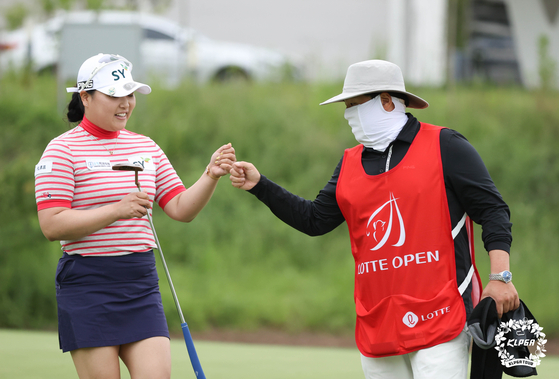 
Kim Cho-hui tallied a hole-in-one on the first day of the first round of the KLPGA Lotte Open today at the Bears Best Cheongna Golf Club in Incheon.

On the 171-yard par-3 seventh hole, Kim used a six iron for her tee shot that landed four-meters in front of the green before it rolled into the hole.

Kim’s hole-in-one is the first of the tournament and the sixth of the season.

Three were made just last week at the E1 Charity Open held at South Springs Country Club in Icheon, Gyeonggi, when Jo Hye-lim, Kim Sae-ro-mi and Kim Cho-yeon all put their tee shots straight into the hole on the par-3 seventh hole, but all on different rounds.

This is Kim Cho-hui's second hole-in-one. She made her career first last year at the 42th KLPGA Championship held at the Lakewood Countryclub in Yangju, Gyeonggi.

“I remember being dumbfounded after my first hole-in-one but today," said Kim. "I knew immediately that I had shot well.”


The most hole-in-ones in one KLPGA Tour season was 28, in 2017. Last season, KLPGA saw 18 hole-in-ones despite playing only 17 tournaments due to the Covid-19 pandemic.