Another supplementary budget is on the way

Another supplementary budget is on the way 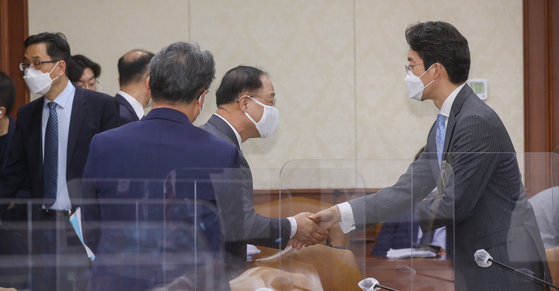 Finance Minister Hong Nam-ki meets with head of reserach institutes and investment bankers at the government complex in Seoul on Friday. At the opening remark, Hong said the government will consider a second supplementary budget for this year, a demand pushed by the Democratic Party. [YONHAP]

While he did not give details, Hong hinted that it will not include universal relief grants like the supplementary budget in May 2020, which sent checks to every Korean family.

Hong said the extra budget will likely focus on vaccine supplies and supporting businesses and families that continues to be hurt by the Covid-19 pandemic.

“The government will consider creating a second supplementary budget [for this year],” Hong said during a meeting with heads of major research institutions and investment banks.

“The government will focus all of its ability on a complete economic recovery accompanied by jobs recovery and stronger inclusiveness this year,” he said.

Hong emphasized that the extra budget will not be funded by new debt. He said government tax collections are expected to exceed expectations thanks to a recovering economy.

If another supplementary budget is created, it would be this year’s second and the sixth since the Covid-19 pandemic started in 2020.

The government has been hesitant because the national debt continues to grow rapidly, threatening its fiscal soundness.

The ruling DP has been asking for relief grants like last year’s, through which every  Korean household received up to 1 million won ($900).

The government prefers to target specific groups such as small businesses for help.

According to a December study by the state-owned think tank Korea Development Institute (KDI), only 30 percent of the government support -- including central government grants and those given by local governments -- was spent.

The bulk was used to repay debt or stashed away as savings.

The KDI added that the stimulus effect was short lived: more than 90 percent of the spending was concentrated in two months.

Despite the economy showing strong signs of recovery, the DP since late last month has been demanding a supplementary budget with grants for all.

On May 28, party floor leader Yun Ho-jung stressed that a supplementary budget would speed up Korea’s economic recovery.

President Moon Jae-in said June 1 he planned to continue an expansionary fiscal policy through next year.

“The expansionary fiscal direction should be maintained for our economic rebound to be certain,” Moon said. “We have to consistently increase [government] investment in employment security and the social safety net including supporting jobs for vulnerable people and employment insurance for all.”

According to the Finance Ministry, in the first quarter, the government collected 88.5 trillion won in taxes, 19 trillion won more than a year ago or a 27.3 percent increase.

It was the first time that taxes exceeded 80 trillion won in the first three months in a year.

The increase in tax collections was largely a result of good businesses for companies like semiconductor manufacturers as the economy recovers.

However, analysts point out that Korea's debt is snowballing.

If the government funds a supplementary budget with additional taxes it has collected so far, Korea’s debt by the end of this year is still estimated to reach 956 trillion won, a 13 percent increase compared to 2020.

Considering that government debt was 660 trillion won in 2017, debt during the Moon administration has risen 45 percent.

The national debt-to-GDP ratio this year is expected to be 47.3 percent, a sharp increase from 36 percent in 2017.

Last year the government also saw its fiscal deficit expand compared to the previous year due to aggressive spending during the Covid-19 pandemic.

Another concern is inflation, which is rising.

Consumer prices in May rose at their fastest pace in nine years, 2.6 percent.


As inflation pressure grows, Bank of Korea Governor Lee Ju-yeol hinted at the possibility of raising interest rates in the second half.

DP floor leader Yun on Thursday denied that relief grants were a political ploy ahead of next year’s presidential election.

“We are returning the additional taxes that were collected back to the people,” Yun said during a party meeting.

“Last year the emergency relief grants contributed to reviving regional economies, which resulted in increases in tax collections in the first half.

“If the government continues to hold on to the taxes that were collected, it will only hold back the economy from recovering,” he argued.