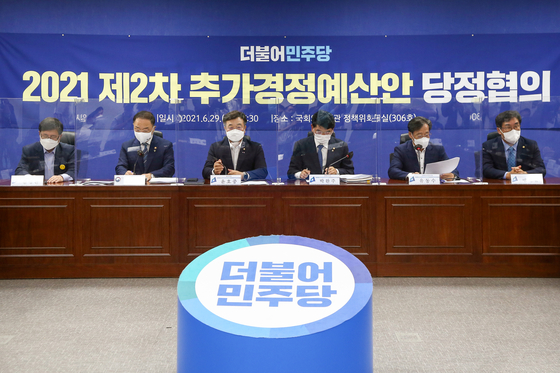 Government and the ruling Democratic Party holds a meeting to discuss on the latest supplementary budget on Tuesday at the National Assembly in Seoul. [YONHAP]

The government and ruling party agreed on a 33-trillion-won ($29 billion) supplementary budget, the sixth since the start of the pandemic and second this year, but the Democratic Party failed to get relief grants for all.

Emergency relief grants will be given to all households except those in the top 20 percent income bracket.

Including the emergency grants, nearly half of the supplementary budget -- or between 15 and 16 trillion won -- will be Covid-19-related stimulative spending. That includes a one-time subsidy of 100,000 won for roughly 3 million low-income households and struggling single parents.

To help small shop owners, prerequisites for government business subsidies will be relaxed.

Earlier this year, 3.85 million stores that suffered due to social distancing regulations received up to 5 million won in subsidies.

With the relaxed prerequisites, some 1.13 million other small shops that were heavily affected by social distancing restrictions or forced to suspend business are expected to get subsidies as high as 9 million won.

“A package of at least 5-trillion-won will help small businesses owners -- even those that were driven out of businesses -- to rebound from their dire situations,” Democratic Party lawmaker Park Wan-joo said Tuesday after Finance Minister Hong Nam-ki met with the DP leadership including floor leader Yun Ho-jung.

Some 4 to 5 trillion won will be used for pandemic-fighting efforts including the purchase of 162 million vaccine doses, development of Korea’s own vaccine as well as compensating medical centers that have been affected by the pandemic.

Between 2 to 3 trillion won will be used to create jobs as well as on housing-related finances.

Some 2 trillion won will be used to reduce government debt.

More details will be announced after a cabinet meeting later this week.

If approved, this will be the second largest extra budget ever passed after one approved last July, which was 35.1 trillion won.

The Moon Jae-in government has spent a total of 163.4 trillion won in its eight supplementary budgets.

The ruling party emphasized that when including this year’s 3 trillion won in support for businesses and households affected by Covid-19, total support so far adds up to 36 trillion won.

The government and ruling party said no additional bonds will be issued to fund the new budget.

It will be financed through better-than-expected tax collections this year due to the rapid recovery of the economy.

The spending is needed to maintain Korea's economic rebound, the government and DP stressed.

On Monday, the government raised its growth target for this year from 3.2 percent to 4.2 percent.